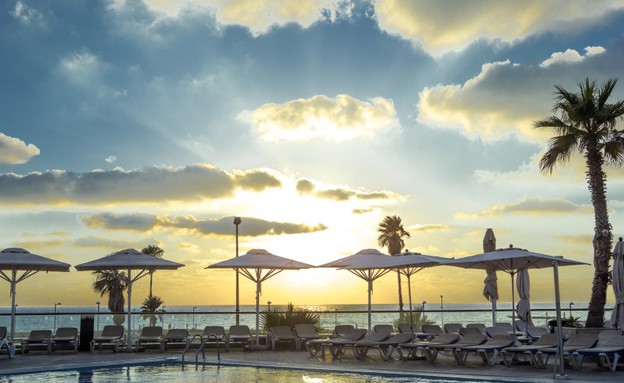 A couple from the center of the country who spent a fun day at a spa in a luxury hotel in Tel Aviv, were required by a hotel employee to stop cracking kernels in the pool and be compensated with a crazy amount of NIS 4,000.

The incident took place about five months ago at the David Intercontinental Hotel in Tel Aviv, one of the most prestigious hotels in the country, while the couple arrived for a fun day at the hotel spa to celebrate their 60th birthday. At one point they finished with the spa Nuclei.

One of the security guards at the hotel approached the couple and asked them if they had brought the bag of seeds from home. “We explained to the security man that we did bring the bag from home, so he asked us to close the bag and stop cracking because it was against the instructions,” the couple claimed. “We did exactly what he asked. We closed the bag and put it back in the bag.”

But that’s not the end of the story. A few minutes later, another security guard arrived at the scene and forcefully demanded that the couple remove the bag of seeds from the pool. “I told him that the bag was in the bag, but the security man insisted that we take the bag out of the pool area and if not he would throw us away. He said that if we did not take the bag out of the pool he would call us police,” the woman claimed. “He claimed that since we were not vacationing at the hotel we could not crack kernels. He asked us to put the bag in the locker. I asked him not to speak to me in an unpleasant tone. I was shocked by the security officer’s speech.

A commotion began to form around the pool. The security guard invited three more security guards to the scene. “When they realized that all the fuss was because of a nuclear bag they felt ashamed. They were sure it was a case of violence,” the couple claimed. After the couple claimed they were surrounded by five security personnel, they felt uncomfortable and decided to leave the hotel and return to their home.

The guests demanded compensation of NIS 10,500

Shortly after the incident a shift supervisor at the hotel contacted the couple and asked to send them a compensation voucher for their unpleasant incident and apologized for the incident. The couple did not provide this and they filed a lawsuit against the hotel in the Small Claims Court in Tel Aviv. According to them, the conduct of the hotel employees caused them great distress, even though they put the kernels in the bag and there was no need to bring security guards. They demanded NIS 10,500 in compensation.

The hotel filed a statement of defense in which it sought to dismiss the lawsuit outright on the grounds that it was unfounded, lacked factual and legal basis and was riddled with inaccuracies and was contrary to reality. According to the hotel, the case of the woman and her husband reflects the phenomenon of the ‘ugly Israeli’. According to the hotel, the woman and her husband violently and intentionally violated the hotel’s procedures. The hotel claims that the woman was reprimanded for this and she was politely asked to stop her actions (cracking kernels) but she vehemently refused with a shameful barbaric behavior and was rude to the hotel staff.

“The very filing of the lawsuit is because of arrogance,” the hotel claims. It was further alleged that according to the hotel’s policy it was forbidden to bring food into the pool complex except for baby food. According to the hotel, the woman decided to tweet about the procedures and put food items in her personal bag and spat the kernel shells to the floor. The hotel further stated that security personnel arrived at the scene because the woman did not obey the instructions.

Senior Registrar Hani Baruch-Alon, who discussed the case, accepted the claim in part. She ruled that there was no room to intensify the incident and there was no need to invite five security personnel to the pool area for no reason, and the warning to order a police car was also unnecessary. According to her, she gives full credence to the testimony of the woman who left a credible impression on her. She is under criticism for the security personnel who caused a high level of mental anguish to the woman and her husband.

In the ruling, the registry stated that the incident caused mental anguish and embarrassment to the couple and determined that they would be compensated in the amount of NIS 4,000.