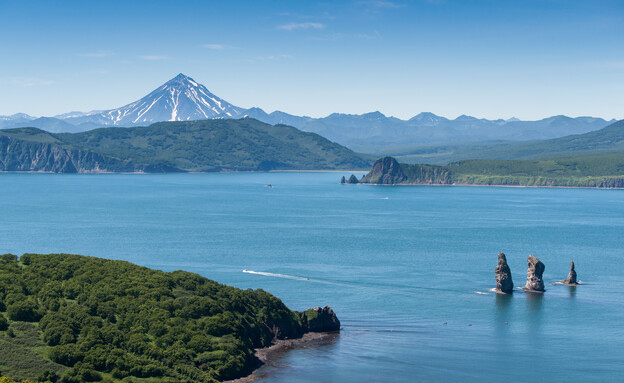 The Kamchatka Peninsula, is a volcanic winter wonderland located in the Far East of Russia. Kamchatka landscapes are pristine with a vast nature of wide rivers, mountains, bears, birds and a particularly sparse human population. In fact, estimates of the number of inhabitants on the peninsula are around 300,000 people, in an area of ​​270,000 square kilometers, more than double the 10 area of ​​the State of Israel.However, in the spectacular peninsula you can also find the Kamchatka Geyser Valley, also known as the Death Valley – and it is incredibly deadly. While the sight of snow covering the rocky mountains may be beautiful, whoever enters one of these small valleys will probably not return.

The valley is known as a cemetery for animals but it is also dangerous for people, which is why it is closed to tourists. When the snow melts, a variety of animals emerge in search of food and water, many of which die shortly thereafter. When predators – like wolves – spot a snack and set off, they die too.

The scary part is that these bodies are naturally cooled and preserved, and often show no signs of external injury or disease.

This mysterious area was not discovered for years until it was accidentally uncovered in the 20th century. Legend has it that two hunters encountered the place in the 1930s, when they discover an arid wasteland covered with dead animals. After experiencing severe headaches for several minutes, the duo escaped, an action that ultimately saved their lives. The story led to much interest in the area, and many adventure seekers visited the valley in the 1940s and 1950s, but not all returned, with locals estimating that about 80 people have died since.

The official version claims that the Valley of Death was not discovered until 1975 by a group of volcanologists led by Vladimir Leonov, when they were greeted by dead animals scattered everywhere. A study conducted between 1975 and 1983 determined that the animals were killed due to a volcanic phenomenon. A volcano emits a lethal mixture of hydrogen sulfide, carbon dioxide, sulfur dioxide and carbon dioxide, which are collected in the lowlands of the valley without winds dispersing them.

Birds are usually the first victim, when they come to drink the water in the thawed river. Their bodies then attract foxes that come to the valley to hunt, bringing with them larger predators. The deadly gases prevent the formation of bacteria responsible for decomposition, which leads to the preservation of dead animal carcasses.

Some believe that the gases in the valley may cause partial paralysis, but this has not yet been confirmed. In contrast, evidence that has been verified pertains to humans, who said they suffered from headaches, fever and weakness, which on prolonged exposure can lead to death.

While much scientific research has focused on the area, unhappy stories and rumors about the valley continue to roll. Animal carcasses, for example, are ostensibly taken from the valley on a regular basis, though no one knows who does it and why.

Another unsolved mystery stems from stories that emerged from the mid-1970s. According to Victor Driagin, a student of Leonov who assisted in the discovery of the valley, the Soviet military authorities visited the helicopter, collected some unusual samples and left immediately.

Whether these stories are true or not, Death Valley is still dangerous. While it is closed to visitors, it can be viewed from an observation deck that sits at a safe distance. The second way to see the infamous territory, is to take a helicopter tour, from which you can also see other parts of the peninsula.