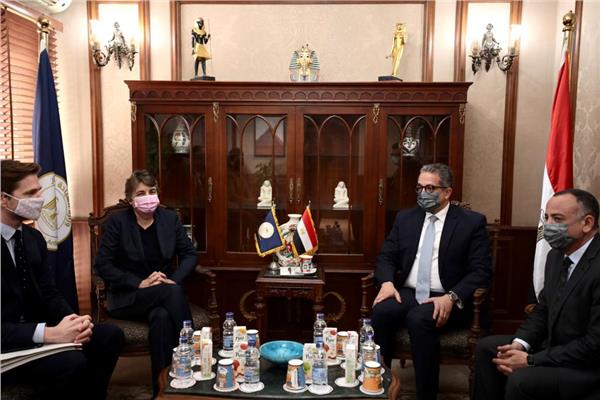 Khaled El-Anany, Minister of Tourism and Antiquities, received Lawrence de Carr, President of the Louvre Museum in Paris, and the accompanying delegation, at the ministry’s headquarters in Abbasiya, to discuss ways of enhancing cooperation between the Egyptian side and the Louvre Museum, one of the oldest museum bodies in the world.

Dr. Khaled El-Anany began the meeting by welcoming the museum’s president and the delegation accompanying her, congratulating her on assuming her new position last September, and stressing the depth of Egyptian-French relations, as the two countries link extensive historical and civilizational relations and fruitful cooperation in many fields, including tourism and antiquities.

The meeting discussed a number of topics that would enhance cooperation between the Ministry of Tourism and Antiquities, represented by the Supreme Council of Antiquities, and the Louvre Museum, including working to renew the cooperation protocol signed in 2016 between the Islamic Department of the Louvre Museum and the Museum of Islamic Art in Cairo. And maximizing the benefit from it by expanding the areas of cooperation to include the exchange of experiences in the fields of museum work in general, including training of curators and restorers, holding temporary archaeological exhibitions and other areas of fruitful cooperation.

During the meeting, the Minister of Tourism and Antiquities stressed the need to work on the sustainability of the projects carried out in cooperation between the two parties, in order to ensure the continuity and diversity of joint frameworks, especially the archaeological and museum part.

For her part, Laurence des Cars stressed her happiness at the meeting and what it represented in establishing a renewed formula for the constructive Egyptian partnership in the fields of antiquities and museums. She also commended the role played by the Egyptian Ministry of Tourism and Antiquities in the fields of museums and antiquities. The meeting was attended from the Egyptian side by Dr. Mostafa Waziri, Secretary-General of the Supreme Council of Antiquities, Professor Moamen Othman, Head of the Museums Sector, Minister Plenipotentiary Dalia Abdel Fattah, General Supervisor of the General Department of International Relations and Agreements, Dr. Mamdouh Othman, Director General of the Museum of Islamic Art, and from the French side, Vincent Rondot, Director of the Museum’s Egyptology Department. and Matthias Grolier, Director of the Office of the President of the Louvre.