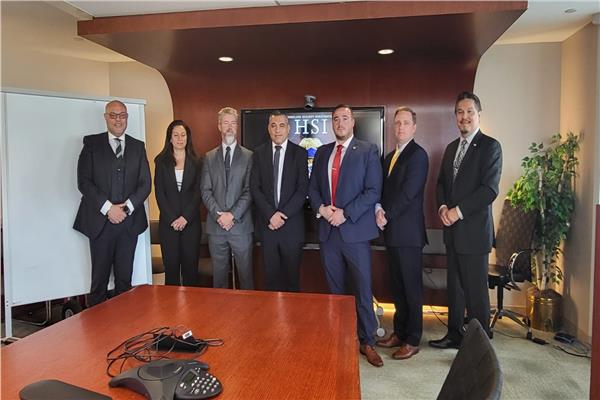 Counselor Ahmed Maher, Legal Adviser to the Ministry of Tourism and Antiquities, and Shaaban Abdel-Gawad, General Supervisor of the General Administration of Recovered Antiquities, traveled to Washington, DC, at the invitation of the American side, to discuss ways of joint cooperation between the two parties in the field of recovering illegally smuggled antiquities.

This came within the framework of Egypt’s tireless efforts to recover the Egyptian antiquities smuggled abroad, and the great interest the Egyptian state and its institutions attach to preserving its antiquities, heritage and civilizational history.

Shaaban Abdel Gawad explained that during the visit, a number of meetings and discussions were held with the concerned authorities in the US states, including representatives of the Home Land Security Department and the Federal Bureau of Investigation (FBI), which came to confirm the role played by the Ministry of Interior. Tourism and Antiquities in the field of restoring Egyptian antiquities smuggled abroad illegally.

He added that the meetings that were held aimed at promoting areas of joint cooperation with the American side, and how to find an appropriate mechanism for coordination between the two countries in the field of recovering antiquities that came out of Egypt illegally, and stressing the need to speed up the pace of procedures regarding the file of antiquities recovery.

During the meetings, the American side expressed its gratitude for accepting the invitation, and greatly appreciated the efforts made by Egypt regarding this file, and its permanent efforts to criminalize the illegal trafficking of Egyptian antiquities abroad, and reiterated the importance of this cooperation and its role in making progress regarding the recovery of smuggled antiquities.

It is worth noting that Egypt succeeded in returning 5,000 artifacts from the United States of America in 2021 after concerted efforts between the two sides.

One of the most important pieces recovered from the USA is the golden sarcophagus of the priest Najm Ankh.