Egypt: To activate German tourism, the Deputy Minister of Tourism meets with representatives of the sector via “video conference” 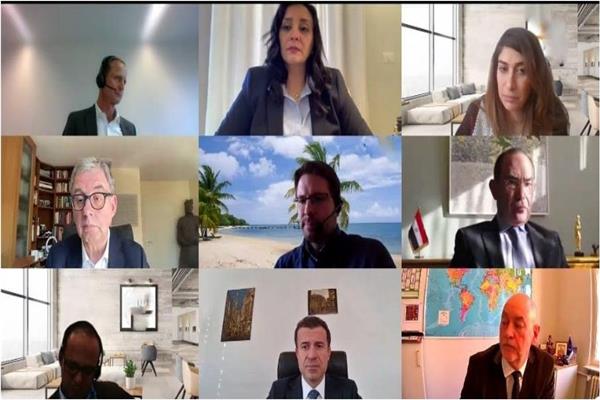 Ghada Shalaby, Deputy Minister of Tourism and Antiquities for Tourism Affairs, participated in a video conference meeting with representatives of the tourism sector in the German market, within the framework of the Ministry of Tourism and Antiquities’ keenness to maintain continuous communication with the profession’s partners in the markets exporting tourism to Egypt.

The meeting was attended by Ambassador Khaled Galal, Egypt’s ambassador to Germany, Professor Mohamed Farag, the tourist attache at the Egyptian Tourist Office in Berlin, and representatives of the Egyptian Federation of Tourist Chambers, the two rooms of hotel establishments, and travel and tourism companies and agencies.

Read also: – The Ministry of Antiquities participates in sponsoring the activities of the Miss World competition for tourism and the environment

She also spoke about Egypt’s experience in resuming Egyptian tourism since July 2020, pointing out that the application of precautionary measures has been decisively relied upon, and it is still in place so far, without any complacency with any violating tourist or hotel facility, and there are specialized international companies that review safety requirements. Health care facilities in hotel establishments, in coordination and cooperation with the Ministry.

She explained that the ministry launched a 24-hour hotline to receive suggestions and complaints from tourists and respond immediately to them.

On the developments in Egyptian tourism, the Deputy Minister explained the state’s efforts to work on linking the cultural tourism product with the beach and leisure tourism product, pointing to the launch of the Sharm El-Sheikh-Luxor airline last October, which allows tourists to enjoy the Egyptian beaches in addition to watching Egyptian antiquities and getting to know the The ancient Egyptian civilization, in addition to new cities such as the new city of El Alamein, which represents a new product that the tourist can visit throughout the year.

She also talked about Egypt’s hosting of the 27th Conference of the Parties to the United Nations Convention on Climate Change “Cop 27”, which is scheduled to be held next November, explaining that this conference will shed light on what is new in Sharm El-Sheikh as a green city.

For his part, Ambassador Khaled Galal made it clear that he is communicating with the Egyptian Tourist Office in Germany to identify any obstacles that prevent the increase of incoming movement from Germany to Egypt to study and discuss them with the German side to work on overcoming them.

At the end of the meeting, it was agreed to work to intensify the propaganda campaigns for the Egyptian destination in the German market and to invite a number of bloggers and influencers to visit Egypt and convey their experience to their followers through their pages on social networking sites.