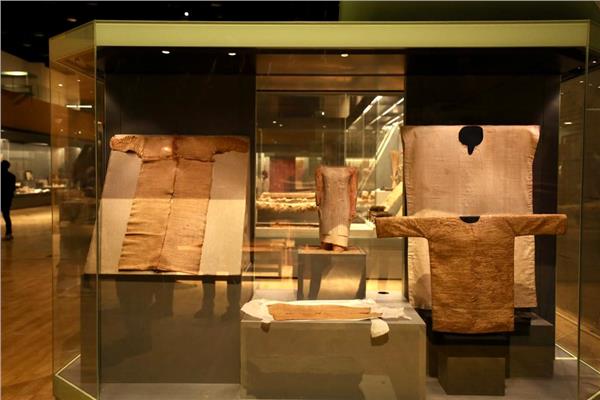 Minister of Tourism and Antiquities, Dr. Khaled El-Anany, recently inspected the latest developments in the work in progress in the Egyptian Textile Hall at the National Museum of Egyptian Civilization in Fustat, and followed up on the development of the museum’s exhibition scenario, in preparation for its opening within the next few weeks.

Accompanied during the tour was Dr. Ahmed Ghoneim, CEO of the Museum Authority, Dr. Mustafa Waziri, Secretary General of the Supreme Council of Antiquities, Dr. Mahmoud Mabrouk, Advisor to the Minister of Tourism and Antiquities for the museum exhibition, Moamen Othman, head of the Museums Sector and member of the Screenplay Committee, and Dr. Osama Abdel Wareth, a member of the Screenplay Committee.

During the tour, the Minister of Tourism and Antiquities directed to make some modifications to the display scenario, and the locations of some of the waiters in the hall, in a way that contributes to enriching the content of the show, and tells the visitor the history of the textile industry and its tools throughout the different eras of the Egyptian civilization starting from the prehistoric era.

For his part, Moamen Othman explained that the Textile Hall will include a variety of unique artifacts that were displayed in the Textile Museum on Al-Moez Street, and which will be re-displayed in the Textile Hall of the National Museum of Civilization, using the latest methods of modern display techniques and lighting system, and modern and equipped display screens, in addition to To the presence of screens to display a group of documentaries that tell the history of Egyptian textiles throughout the ages.

For his part, Dr. Mahmoud Mabrouk said that among the most important pieces on display are linen robes dating back to the various antiquities of the Ptolemaic, Coptic, Islamic and modern eras, and a group of terry weaving and various fabrics, in addition to ancient spinning and weaving tools, a model of a textile workshop dating back to the Middle Kingdom, and a head statue. Weavers in the Old Kingdom, and a group of statues and paintings that chronicle the costumes through different ages in ancient Egypt.

Moamen Othman added that the Ministry had decided to transfer the holdings of the Textile Museum to the Museum of Civilization in Fustat, due to the poor construction condition of the Textile Museum building on Al Moez Street, and in order to preserve the integrity of its archaeological holdings. All the necessary measures and the use of scientific methods, from packaging and transporting artifacts, until they were displayed in their two curtains in the Egyptian Textile Hall of the National Museum of Civilization.