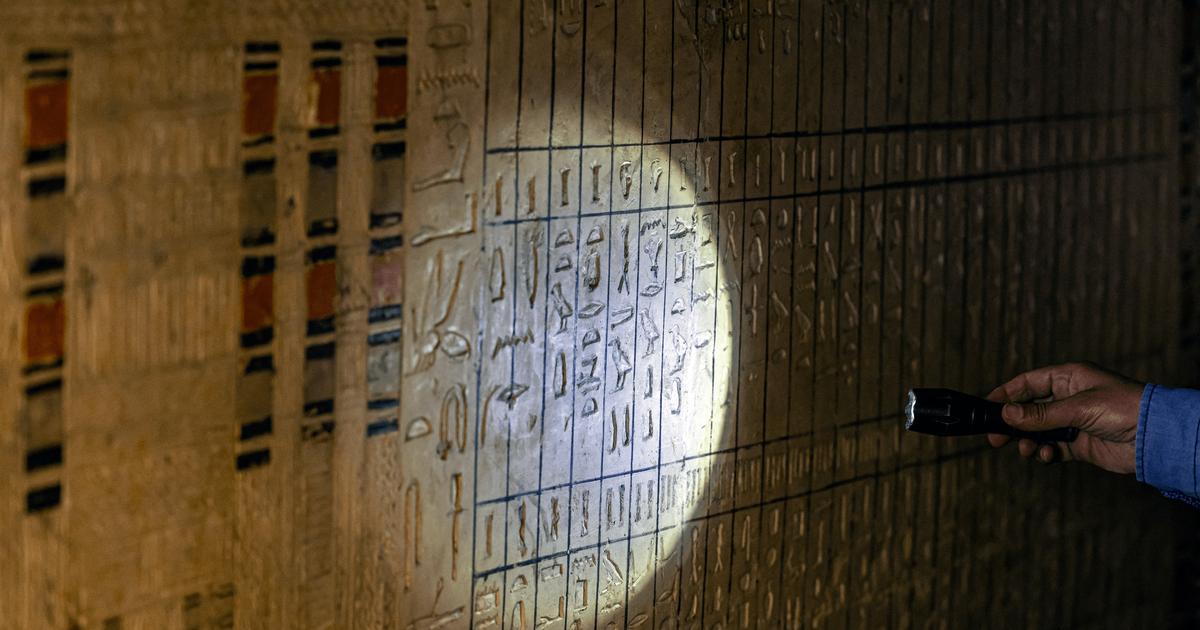 Egyptologists unearthed several tombs of high dignitaries of the VIe or VIIe dynasty, near the unfinished monument of King Merenre Iis.

The sands of Egypt have delivered new secrets to the archaeologists in charge of the excavation of the ancient necropolis of Saqqara. No less than five graves have been unearthed at the funeral site located about fifteen kilometers south of Cairo, the Egyptian Ministry of Tourism and Antiquities announced on Thursday. Decorated for some with well-preserved polychrome paintings, these tombs of high dignitaries would be dated from the end of the IIIe millennium BC, towards the end of the Egyptian Old Kingdom.

Read alsoDeath of the Egyptologist Jean-Pierre Corteggiani, one of the rediscovery of the Alexandria lighthouse

All of these five shaft burials were discovered near the collapsed and unfinished pyramid of the King of the VIe dynastie Mérenrê Iis, a transitional ruler who reigned around 2255 to 2246 BCE. The aristocratic tombs were excavated in a space located to the northeast of the royal monument, with which they are perhaps associated. Perhaps, but not necessarily, the statement from the Egyptian ministry also evoking the First Intermediate Period, which opens around 2140 BC. AD with the VIIe royal dynasty. The chronological uncertainty will perhaps be supported by the additional research that Egyptian archaeologists continue to carry out on the spot.

The identity of the various deceased was nevertheless able to be traced thanks to the deciphered inscriptions inside the funerary chambers. The hieroglyphs have thus awakened the name, dormant for almost four millennia, of Iry, Pepi Nefhany and Henu, respectively statesman, priest and “steward of the royal household”. The last two graves were those of a woman named Beti, possible priestess of Hator, and that of the probable anonymous wife of a certain Yart, buried nearby.

In Saqqara, five ancient tombs unearthed near a pyramid

Dug between six and seven meters deep on average, the five tombs contained some vestiges having survived their probable looting during the years or centuries following their construction. Egyptologists have notably been able to identify the limestone sarcophagus of Iry, as well as several small statuettes, in the neighboring wells. The facing limestone used in the tomb of a certain Iry seems to have been partly extracted over the past centuries, no doubt reused for other burials in the necropolis, revealing the rougher walls of the chamber.

Read alsoNotre-Dame de Paris: behind the scenes of the site of the century

However, not all funeral homes were in such a dismal state. The engravings and frescoes of the tombs of Beti and Henu have thus still retained a proud appearance and shimmering colors. The funerary scenes they contain would illustrate in particular “tables of offerings, the seven oils and the facade of a palace”, according to the press release from the Ministry of Antiquities. Far from being a simple morbid coquetry, the seven oils in question were used to prepare the deceased and were to ensure that they regained the use of their legs in the afterlife.

Relatively close to Cairo, the Saqqara necropolis has been the subject of intensive research and restoration work for several years. Like the necropolis of Giza located in the immediate suburbs of Cairo, the funerary occupation of the site of Saqqara dates back to the dawn of Egyptian Antiquity, at the time of the Old Kingdom (between 2600 and 2100 before our era). This era of stability is marked by the rise of the pyramids, some early prototypes of which – such as the stepped monument of King Djoser – emerge from the sands of Saqqara. Backed by the ancient capital of Memphis, the desert plateau was used by the aristocracy until the New Kingdom and then, to a lesser extent, under the Greco-Roman era of Egypt.