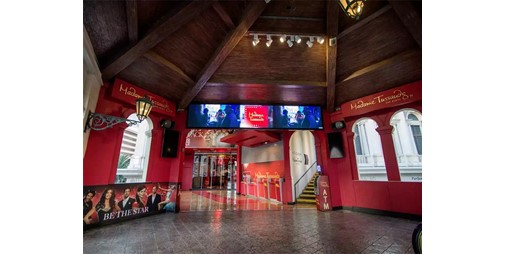 The joy of the bride and groom at the wedding ceremony is always complemented by the presence of loved ones from family and friends. But, how would it be if the wedding list included celebrity guests and stars such as the beautiful American singer Beyoncé, or the famous American actor Zach Galifianakis? Will things get a little complicated?

Fortunately, it is now possible to hold the wedding ceremony at the famous Madame Tussauds Museum in Las Vegas, USA, where the museum provides a golden opportunity for those who are about to get married, enabling the bride and groom to invite a replica of their favorite celebrities. But of course, celebrities will attend but “in bodies of wax”.

The question is, how will that be?

The person who is about to get married chooses a wax replica of his favorite celebrity, whom he would like to attend his wedding. For this purpose, the Museum presents two very different and exciting displays of wedding packages for the future husbands and wives of celebrity lovers, who through either show will be able to obtain a set of digital photos of them and their favorite celebrities.

The first show is called Walk Up Wax Wedding, and its price is 199.99 dollars, and includes the appearance of a wax statue of American star George Clooney, who stands as a witness to the wedding ceremony in the beautiful white chapel in the museum. The offer includes wedding party music, sashes for the groom and bride bearing the words “Just Married” (Just Married), and a small bottle of spirits.

As for the second show, it bears the name “VIP/Wok Up Wax Wedding”, and its price is 224.99 dollars, and it includes all the advantages of the first show, but it provides the groom and the bride with an option to expand their choices of celebrities to more celebrities other than George Clooney, in addition to a photo One printed inside a frame.

Those who are about to marry can choose the celebrities who want their wax statue to appear during the wedding ceremonies, by choosing from among the wax statues inside the museum. This offer also allows the bride and groom to get a wax model that is a copy of their palms, as a gift for them to carry to their new home.

Those who wish to book any of these two interesting shows must pay a visit to Madame Tussauds and request the appropriate show for them, as the shows do not require prior notice or reservation. All that has to be done is to visit the museum and hire one of the hosts working there, and ask him about the wedding packages, and then the officials will arrange everything to prepare for an interesting, exciting and unforgettable ceremony.

Among the stars and stars whose statues are included in the famous museum are the American actor Johnny Depp, 58, the American star Robert De Niro, 78, the beautiful American singer Katy Perry, 37, the “Queen of Pop” Madonna, 63, and the famous American star. Brad Pitt, 58, and the late legendary star Michael Jackson.