The first city in the world to charge an entrance fee 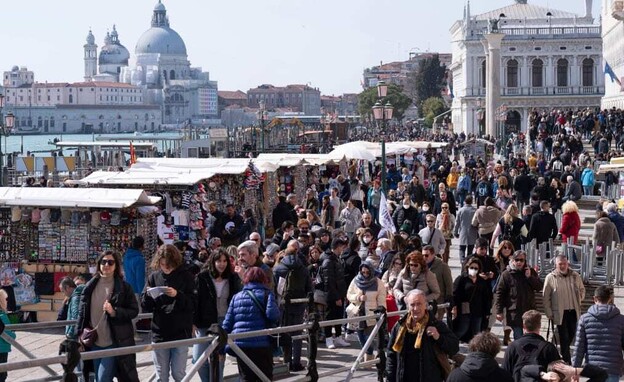 For the first time in the world: Venice is expected to be the first city to charge an entrance fee from tourists, CNN reported today (Friday). The fee, which will stand at up to ten euros, will be charged through a booking system set up for one-day trips, and only those who have a booking will be able to enter the city.

The Mayor of Venice, Luigi Bruniaro, announced that visitors will be able to place the bookings starting this summer as an experiment and the entrance fee will take effect from January 2023. This plan was actually announced even before the outbreak of the Corona, but then “frozen” The shortage of tourists.

A breath of fresh air for operators.
Today many have understood that making the City bookable is the right way to take, for a more balanced management of tourism.
We will be the first in the world in this difficult experimentation pic.twitter.com/XmTOptMfG0

Bruniaro wrote on his Twitter account that the booking system is “the right step to take to balance tourism. We will be the first in the world to carry out this difficult experiment,” he said. The city’s tourism director, Simon Venturini, told local television that within weeks a ‘simple and fast’ portal for bookings would be launched. “The corona made us realize that what happened the day before was no longer acceptable. The mentality has changed,” he said.

He added that in 2022 the system will operate on a voluntary basis, and visitors who register will be offered various incentives such as the option to skip queues at various museums and sites. The system will run as a start as an experiment, and the obligation to use it is expected to be implemented in January 2023.

“The booking system will give us a chance to know how many people are expected to arrive that day, and according to the number to calibrate the services,” Ventorini said, adding that the system could “mark” people who change their minds. He also said that the system will be able to tell the guest on what dates there are, for example, holidays when there will be congestion, and when it is worthwhile for him to arrive in order to exhaust the visit.

In January 2023, the payment is expected to be in the range of between 3 euros on a “quiet” day, and 10 euros on a busy day. According to CNN, the payment will only be for one-day trips, meaning – those who stay overnight in Venice will not pay. The idea is to deter the “hit and run travelers” who come to town, spend some money on local businesses and leave. “Visitors should take a slower and more respectful approach, rather than go in to take pictures and leave,” Ventorini said. He also estimated that more cities would join Venice and charge a fee.