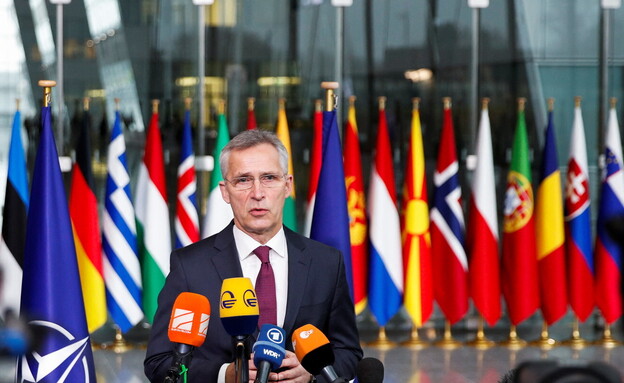 Hours after Turkey’s announcement yesterday that it would support Finland’s and Sweden’s accession to NATO, Alliance Secretary – General Jens Stoltenberg called this morning (Wednesday) at the annual conference in Madrid to unite and expedite the process of joining. At the same time, he attacked Russia and China, claiming that Russia posed a “direct threat” to NATO. Earlier this week he warned that relations between NATO and Russia are at their lowest point since the end of the Cold War.US President Joe Biden today announced a significant increase in U.S. military power on the European continent and announced the establishment of a new military base in Poland, and an increase in U.S. Army land, air and naval power across the continent. This comes after Stoltenberg’s announcement earlier this week – that NATO will increase the number of fighters in Russia’s borders – from 40,000 today to more than 300,000. For many more years. ”

“We will make a decision to invite Sweden and Finland to join, it was done at an unprecedented speed,” Stoltenberg told reporters at the annual conference in Madrid. He added that “after the invitation, we will be required to ratify the process in all 30 parliaments. It always takes some time, but I expect it to pass fairly quickly as the Allies will express ratification of this procedure as soon as possible.” After the two – the NATO border with Russia is expected to grow by about 1,300 km.

At the same time, this morning Stoltenberg attacked China, possibly due to its support for Russia and the fact that it did not bother to condemn the fighting in Ukraine. “China poses a challenge to NATO’s values ​​and interests, and the Alliance needs to take into account the implications for its security of China’s investment in long-term modern weapons,” the secretary general said. He added that he expects to make a “very important decision” regarding the challenges facing the Alliance in relation to the field of terrorism.

Stoltenberg welcomed the approval of the membership of Finland and Sweden and said he was “pleased to announce that we now have an agreement paving the way for Finland and Sweden to join NATO. The main obstacle was removed after Turkey announced yesterday that it had accepted all its demands and removed its opposition to the move. “Turkey, Finland and Sweden have signed a memorandum addressing Turkey’s concerns, including arms exports and the fight against terrorism,” he said.

Yesterday, the foreign ministers of the three countries, in the presence of the leaders – Turkish President Erdogan, Finnish President Ninisto and Swedish Prime Minister Anderson – signed the joint memorandum of understanding. Anderson said this morning that she had reached a “very good” agreement, dismissing allegations that she had “given up” on Erdogan to persuade him to cancel the veto he had imposed. Anderson said she had presented him with changes to the terrorism legislation in Sweden, which is due to take effect as early as next month. “We will continue our fight against terrorism as NATO members do, in closer cooperation with Turkey,” the Swedish prime minister said.

#Sweden & #Finland should not start celebrating their #NATO membership until #Turkey (#Turkish parliament) approves the accession protocol. #Erdogan can change his position anytime depending on many factors: the USA & Biden (F-16), potential war with #Greece, #Russia‘s #Putin… pic.twitter.com/pZkNB2JGkN

In Turkey, they expressed satisfaction with the move, from Erdogan’s office dedicated to the fact that “Turkey has got what it wants and has achieved significant achievements in the fight against terrorist organizations.” Until yesterday, Turkey conditioned the move on a series of measures against the Kurdish Workers’ Party, mainly in Sweden, alongside the demand for the removal of the arms embargo the two imposed on Turkey upon its invasion of Syria in 2019.

The full text of the memorandum signed between the two countries says that Finland and Sweden will “expand their support” in Turkey on national security issues. The Nordic countries have agreed to issue thePKK Outlawed, and will “not provide support” to the Syrian-Kurdish Unionist Party (PYD) And the defense group (YPG) Who fought against ISIS in Syria.

Finland and Sweden have confirmed that they will remove the arms embargo, and have announced that they will work with Turkey on a request for extradition. Sweden is home to more than 100,000 Kurdish refugees, and Turkey has called for the extradition of members of the community, which it says are linked toPKK And-YPG.

Congratulations to Finland, Sweden, and Turkey on signing a trilateral memorandum – a crucial step towards a NATO invite to Finland and Sweden, which will strengthen our Alliance and bolster our collective security – and a great way to begin the Summit. pic.twitter.com/ug47DhRDGl

During the current NATO summit, the leaders from Finland and Sweden are invited as invited – that is, their countries are on the path to full membership in the Alliance, subject to the completion of the ratification process in all countries – a technical but necessary step. A crucial step “towards inviting Finland and Sweden to NATO, saying it will” strengthen our alliance and collective security. “British Prime Minister Boris Johnson welcomed the announcement: “Our brilliant alliance is stronger and safer.”

“We didn’t have any luck, but things like this can happen,” said Carlo Ancelotti