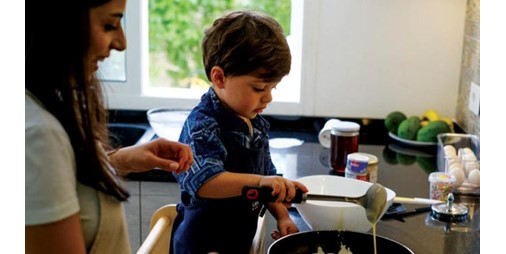 Two-year-old Liam Haddad, known to his followers on social media as Chef Bobo, enjoys cooking a lot, his mother Sibal Haddad told Reuters from their home in Mount Lebanon.

Liam and Sibel are seen together preparing recipes in videos on their social media accounts as “Mama Di Bobo” for thousands of followers on Instagram and more than a million followers on Tik Tok.

Sibal said she has always considered cooking a form of therapy. When Liam was just a few months old, she launched her own food and recipes page on social media, but with her busy it stopped.

She added, “For me, cooking is a treatment. As soon as I miss cooking and start moving in the kitchen, this thing for me comforts me a lot.”

And Sibal continued, “When I found out that Liam loves to cook and has become more happy with this activity, I decided to return to photography and go back to film together this time so that people also get to know him and we also share our funny diaries in the kitchen.”

The duo sometimes recreate and rate popular food and drink recipes, and at other times offer their own easy-to-make recipes.

The 32-year-old said she never expected filming the videos, which were meant to “collect memories”, would make her eldest son Liam famous.