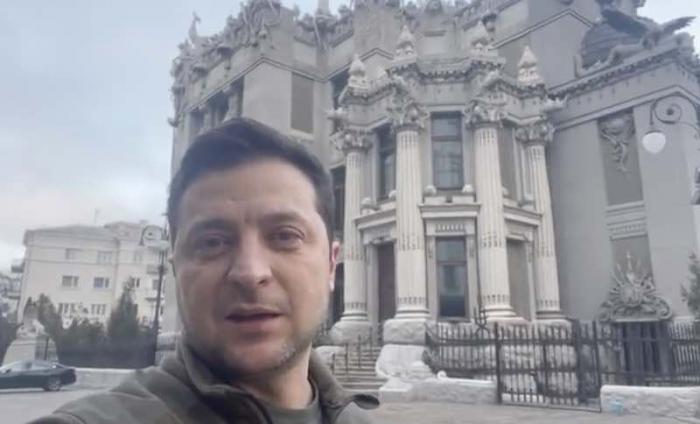 The President of Ukraine, Volodymyr Zelensky, posted a video from today (Saturday) morning from the streets of Kiev. Reports of battles during the night between Russian special forces and Ukrainian forces. The United States is threatening personal sanctions against Putin and Lavrov

War broke out on the streets of the Ukrainian capital Kiev on Saturday as the state army struggled to halt advanced Russian forces in several places, forcing residents to seek shelter from the sounds of explosions and gunfire.

Ukrainians have been preparing to defend their capital in recent days, with officials fifty reservists and Ukrainian television broadcasting instructions for making Molotov cocktails.

The President of Ukraine, Volodymyr Zelensky, uploaded a video of himself on Saturday morning, touring the streets of Kiev and broadcasting that everything is under control.

Reports suggest that the United States had asked him, the night before, to leave the country. In response, Zelensky said, “I need ammunition and weapons – not transportation.” A report by the Ukrainian army claims that during the night between Friday and Saturday, the Russian army was unable to take control of any city.

The United States, for its part, is threatening personal sanctions against Putin and Lavrov. Unverified reports claim that the Russian government has announced that it will completely sever diplomatic ties with all countries or entities that impose sanctions on President Putin or other members of the Russian military, government or population.

In Moscow anti-war demonstrations, when according to reports, the Russian government arrested over a thousand demonstrators across the country who expressed sympathy with Ukraine and argued against the war. The opposition leader Alexei Navalny, who is imprisoned in Russia, also issued a statement condemning the war.

Russia claims to stop satellite launches from French Guinea due to sanctions.

Facebook claims that it will switch Russian propaganda on its network and will not allow Russian entities to purchase online ads for propaganda purposes. Premise, also accused of using the Russian military to locate targets in Ukraine, has also decided to suspend its operations in Ukraine.

The European Union and the United States want to cut off Russia from the system of money transfers between banks in the world (Swift), the only Hungary to oppose it. I will mention that Hungary wants to acquire the Israeli media space, it is doubtful if this will happen in light of the events in Ukraine.

Brazilian is detained by Norway on suspicion of spying for Russia