Kuwait: INAH experts confirm that the roof of the Palenque Palace was painted red 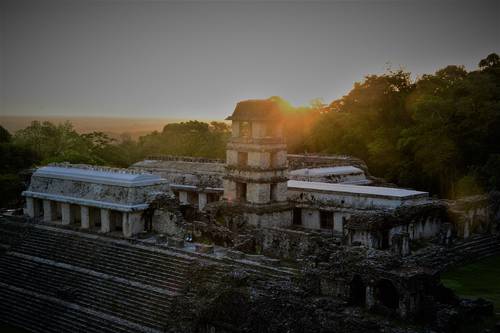 In four years of field work, the restorers recorded important findings. In the image, the Palace of Palenque seen from the Temple of the Inscriptions.Photo Mauricio Marat/courtesy INAH

After four years of fieldwork, a group of restorers from the National Institute of Anthropology and History (INAH) confirmed that the roof of the ceremonial and administrative center of the city of Palenque, in Chiapas, known as the Palace, was painted in Red color.

According to the statement issued by the INAH, by intervening in an integral manner said pre-Hispanic building, From its roofs to its foundations, the specialists registered important discoveries; among the most recent, the detection of remains of original red polychrome.

In 2018, a project led by the federal Ministry of Culture, through INAH, with the support of the United States embassy, ​​undertook various conservation actions in the Palace, the most emblematic Mayan building in the archaeological zone of Palenque, Chiapas, what it involved attend to four constructions that make up the building: the so-called houses B, C, D and E.

These works also allowed detect an old access on the roof of House D, where the remains of the original red polychromy were detected.

The co-director of the Palace’s Architectural Conservation and Decorative Finishes project, Haydeé Orea Magaña, together with the archaeologist Arnoldo González Cruz, explained that the location of the polychrome fragment – ​​which measures one meter by 85 centimeters – was at the extreme north of House D, while removing the cement that was placed in a previous restoration, carried out by the archaeologist Jorge Acosta, between the 60s and 70s, when the cement that protected it was placed.

According to the specialists, “the trace of red pigment –produced from iron oxides and other minerals– has been once again covered with protective layers and plasters of lime and sand, in order to guarantee its permanence in the future.

Had it been left uncovered, the color would soon have degraded. Therefore, we made the decision to cover it up and create a mark that indicates the existence of the original, but does not expose or affect it.

Regarding the access discovered on the roof of House D, which measures 75 by 45 centimeters and preserves three steps, the archaeologists think that its function was to control the entrance through a surveillance post or, even, it is suggested that it was used to give roof maintenance in pre-Hispanic times.

The same measure was taken for said access. It was covered to prevent moisture from seeping into the core of the vault, and frescoed markings were also left to indicate its location.

The importance of these discoveries, they pointed out, it is in the first instance the confirmation that the roofs of the Palace were painted red, while the aforementioned access leads the experts to rethink the uses given to the roofs of the same in the past..

As part of future work, explained Haydeé Orea, it is expected that, Through the Program for the Improvement of Archaeological Zones (Promeza), an initiative created by the Government of Mexico in the context of the works of the Mayan Train, the intervention or total restoration of House A.

Through this program, added the restorer, “the equipment that monitors the humidity, temperature and carbon dioxide emissions of each wall of the tomb of Pakal was renewed. The big one, in Palenque.

It is also proposed, concluded the specialist, “that this year repair and consolidation actions can be initiated in the stuccoed reliefs of the ‘nine lords of the night’ that surround the funerary chamber of the ruler K’inich Janaab’ Pakal, housed in the Temple of the inscriptions”.