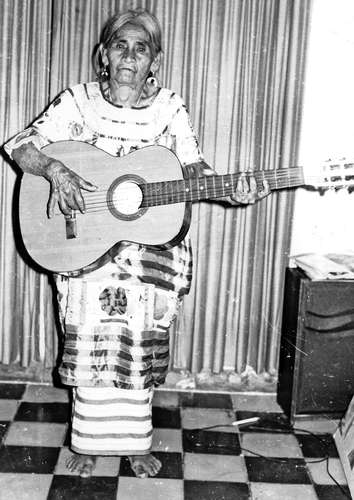 The life of María Sabina (1894-1985), the legendary Mazatec shaman who rose to fame in the mid-20th century when the American writer Robert Gordon Wasson (1898-1986), a pioneer in the study of ethnomycology, revealed to the world her existence, is an example of wisdomconsidered the anthropologist Julio Glockner.

In interview with The Day, about the publication of a new edition of the book Life of María Sabina: The sap of mushrooms, Written in 1977 by the engineer Álvaro Estrada, a great friend of the healer (who died 14 years ago), the specialist in the worldview of native peoples reiterated that the woman who so excited hippies, scientists and writers he was at the highest levels of the wisdom of his culture and today is an example of integrity, honesty, intelligence and lucidity. She was a great woman with an enormous commitment to herself and to the people who consulted her..

Published by Siglo XXI Editores, the text is a kind of oral autobiography, product of the long conversations in Mazateco that the author, originally from Huautla de Jiménez, Oaxaca, had with his countrywoman. Octavio Paz knew this work, which he described as extraordinary document, whose interest is double: anthropological and human.

The book had been out of print for some time, which is why Glockner celebrated the new edition, in which he participates with an introductory text. The reading “is very enjoyable, even when it narrates the sometimes tragic life of María Sabina. Through this story, the reader can have an idea of ​​the worldview of the Mazateco people, above all, the way in which the human body is conceived and its link with nature through the rituals that she carried out, like many other Mazatec wise men who practice those evenings.

It is very important that the new generations have access to this information so that they understand the meaning of the shaman’s wisdom, which involved both healing and divinatory qualities.

In particular, Glockner made a point of discarding the word hallucinogen when referring to the effects of mushrooms in the rituals of María Sabina. He proposed instead the neologism entheogenthat means god within us o generate the sacred within.

“If we continue to use the term ‘hallucinogenic,’ we hinder the understanding of the nature of the Mazatec culture and its rituals, because that word leads us to think in terms of fantasy, errors, a failed trial, or lies.

▲ Edited by the Siglo XXI label, the book is a oral autobiography, product of long conversations in Mazatec that the author had with the healer. In the image, included in the work, María Sabina visiting Álvaro Estrada’s house.Photo Álvaro Estrada

“In other words, it deviates from the path that allows us to understand that, in principle, María Sabina’s rituals were sacramental acts, of communion with the mushrooms (holy children, as she called them), considered sacred entities that are incorporated into the body and, therefore, Therefore, she also became a sacred being. She was consecrated by the mushroom and that is how she explained it in her songs (‘I am a spirit woman’, ‘I am a woman of light’). It is literally an act equivalent to the Christian Eucharist.”

In Huautla, the anthropologist affirmed, They are very fond of María Sabina. A few years ago I was there for the festival of the dead, and her grave was full of flowers. A festival has been organized in her memory; Of course, it is beginning to have tourist overtones.

The specialist insisted that at the time of the Mazatec shaman and even now, there have been many prejudices around mushrooms, which have been erroneously classified as drugs: “It is a very big mistake, because they do not take into account their natural origin. They are not addictive and do not cause social conflicts or psychotic outbreaks, if they are not latent. However, these plants are not sweets and that must be understood very seriously.

“María Sabina made a great contribution to understanding the nature of a culture, the Mazatec, which would be a kind of mirror of others, regarding the use of sacred plants. It is enough to recall the chronicles of the 16th century that recorded, for example, the day when 2,000 dancers were in the Plaza del Templo Mayor, on the enthronement of Moctezuma II, consuming mushrooms for four days.

“You have to break down with intelligence, good arguments and knowledge that barrier of misunderstanding around these rituals. Therefore, this book will be a new discovery of the figure of María Sabina, who in her shamanic chants said: ‘I am a whirlpool woman, I am a woman who whistles, I am a woman who spins, a wise woman in medicine, a star woman of God’ . ”

For a 1989 edition, Álvaro Estrada added shamanic chants that are in the new version of this work, to which you can go frequently, and you will always find spiritual and intellectual wealthconcluded Julio Glockner.