Ashley Martínez is the first Mexican girl to discover an asteroid 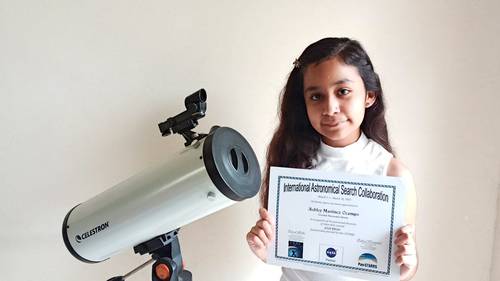 The 11-year-old from Morelos received a diploma from the IASC and the US space agency.Photo courtesy of the Urania Astronomical Society

The Minor Planet Center (MPC, for its acronym in English), of the International Astronomical Union, confirmed the discovery of an asteroid made by Ashley Martínez Ocampo, 11 years old, originally from the state of Morelos. She is the first Mexican girl to make such a discovery.

As part of the International Astronomical Search Collaboration (IASC) program, sponsored by NASA, in which schools and clubs around the world participate, the little girl found that object in the main asteroid belt, now identified as 2021 FD26.

As a result of her discovery, Ashley will have the opportunity to give the asteroid a name, once more details of its orbit are known in the coming years. For now, she received a diploma from the IASC and NASA for her discovery, the Urania Astronomical Society (SAU), to which the girl belongs, reported in a statement.

Ashley joined the search for meteorites at the invitation, precisely, of the SAU, an organization of amateur astronomers from Morelos who registered with the IASC to detect these bodies in dozens of photographic images of the sky, taken by the Pan-Starrs, a telescope of panoramic reconnaissance and rapid response system consisting of two 1.8-meter telescopes, located in Hawaii.

These devices continuously scan the universe for near-Earth asteroids that could pose a threat to the planet. Pan-Starrs makes some of its observational data available to the IASC in order to facilitate research among students and astronomical clubs around the world.

During the March 2021 search campaign, Ashley analyzed, under the supervision of the SAU, more than 30 photographs of different areas of the sky in search of small points that moved between the background stars, using software on his computer.

It took a long time to find the asteroid, since I had to analyze several images carefully, not to miss anything; it was complicated by occasional software glitches that confused me, but once I identified it I felt very proudAshley said.

Astronomer Cassidy Davis, coordinator of the IASC, pointed out that Ashley made original observations during the campaign. Asteroid detections are kept in the MPC database for many years, until there are a sufficient number of observations to fully confirm the orbit. That process typically takes six to 10 years, at which point the asteroid is numbered and cataloged by the International Astronomical Union. The numbered ones can be named by their discoverers.

Ashley has participated in several IASC campaigns and is awaiting confirmation of the discovery of another five asteroids. When asked what name she would give to the one that was already confirmed, she replied that It is a difficult question to answer, I still have a few years to think about it. The identification of new asteroids is very important because what if one of them hits the Earth. That is why it is relevant that experts and young people interested in astronomy who have the opportunity to discover them, do so.

The SAU also reported that Ashley, who just finished elementary school in Jojutla, Morelos, was selected to participate in the knowledge Olympiad in her entity.