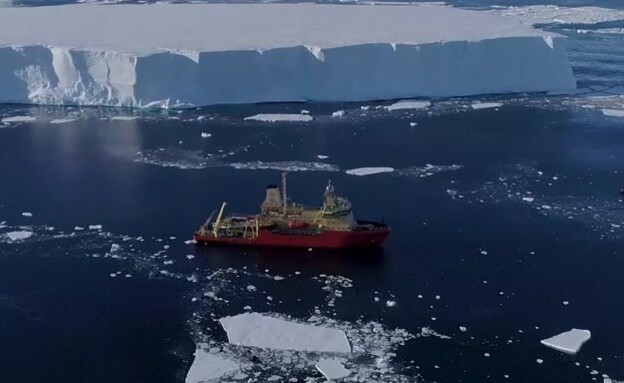 The huge glacier worries scientists and its disengagement could lead to a significant rise in sea level • The horror scenario is a chain reaction of other glaciers will also melt • Investigator: “The glacier could shatter like a car windshield full of cracks”

“The glacier could shatter like a car windshield full of cracks”

The Thwaites Glacier is one of two glaciers in Antarctica that have been of particular concern to scientists in recent years. The UK-sized theaters, such as the ‘Palm Island Glacier’ next to it, have been affected for years by the hot water currents that dissolve it, and the two form the ‘soft belly’ of the western continental ice sheet in Antarctica; But so far the Thwaites Glacier has been relatively stable.

A new report presented at the conference of the American Geophysical Association, the largest gathering of earth sciences, warns of the future of the glacier in the coming years. The report published last week warns of a worsening of the glacier’s condition, due to changes in its eastern ice shelf. The only ice shelf left: “The shelf is in danger of collapsing, a collapse that could come in the next five years – this is due to the intersection of tears on the shelf itself, which have a hidden base of space full of cracks and fissures.”

What are the risks of the Doomsday Glacier disengagement?

The glacier enjoys some protection from the hot water currents thanks to its shelf. The thin part which seems to float on the water serves as a kind of dam: it settles on a ridge at the bottom in a way that allows a blockage that protects large areas from the glacier itself. Areas that are beyond the line of connection between the shelf and the glacier and the continental ice sheet. The new report points to a devastating process that is reaching an alarming peak, which will eventually see the collapse of the shelf.

“The glacier could shatter like a car windshield full of cracks,” the experts explain. “It will not cause a significant rise in the water level, but, once that dam is no longer in place to protect the entire glacier – it will also melt, leading to a 65 centimeter rise in the world water level, which will occur over the next few centuries. Of the “Doomsday Glacier”.

An undesirable phenomenon that may also accompany this event – is a chain reaction of dissolving additional glaciers in the area that will fill the basin at the bottom that is currently filled by the Thwaites Glacier. Such a displacement could eventually lead to the loss of the entire continental ice sheet of Antarctica – and that already means a 3-meter rise in ocean level.