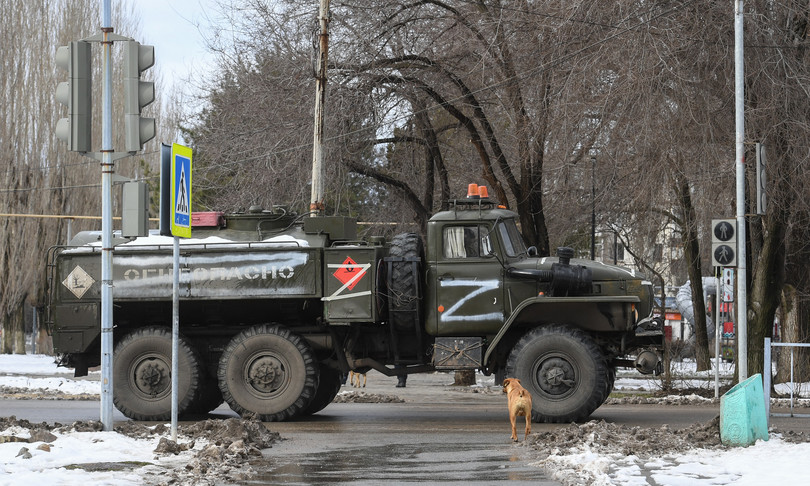 From the Russian gymnast who flaunts it on the podium to the nationalists who stick it with a sticker on cars or draw it on the walls: the ‘Z’ has become the symbol of the Russian invasion of Ukraine, a sort of signature of those who wants to express support for President Vladimir Putin’s decision.

A zeta drawn in white paint on Moscow trucks, armored vehicles and tanks had been noticed from the start of the operation, sometimes appearing inside a square. It could be one way to make the means identifiable with respect to the Ukrainian ones of the same model and to avoid friendly fire, especially from above.

However, many other hypotheses have circulated on the meaning of ‘z’, which is not even a letter of the Cyrillic alphabet. According to military experts, it could be useful for Russian soldiers to understand where a particular vehicle is headed (it could imply Zapad, west, the main director of the invasion). After all even the Americans in Iraq painted chevrons on their vehicles to distinguish the different battalions.

However, the widespread use of the ‘zeta’ now suggests a sort of sign of generalized use. It has been said by the Russian Defense Ministry that it stands for ‘za pobedu’, ‘for victory’. Another version is that alludes to the initial of the Ukrainian president Volodymyr Zelensky a bit like writing the name of the enemy on duty on the missiles destined for aerial bombardments, or for the final phase of the liberation of the Donbass.

What is certain is that it is recognized by Russian nationalists to the extent that the pro-Kremlin news site, Russia Today, sells t-shirts with the zeta. And gymnast Ivan Kuliak, who finished third in a World Cup competition in Qatar, had it printed on the shirt that he also wore during the awards ceremony, when he found himself next to the winner who was a Ukrainian, Kovtun Illia.

On the occasion of the operation in Crimea, with the annexation of the Ukrainian peninsula to the Black Sea, the ribbon of St. George (black and orange), which commemorates the victory over Nazism, was the emblem of support for the president. From the Maidan revolution onwards, Moscow has increasingly relied on the narrative that Ukraine is a country in the hands of the Nazis; the reference is to ultra-right fringes that to date have no place in the government even though the infamous neo-Nazi-inspired Azov Battalion has committed documented crimes in Donbass.