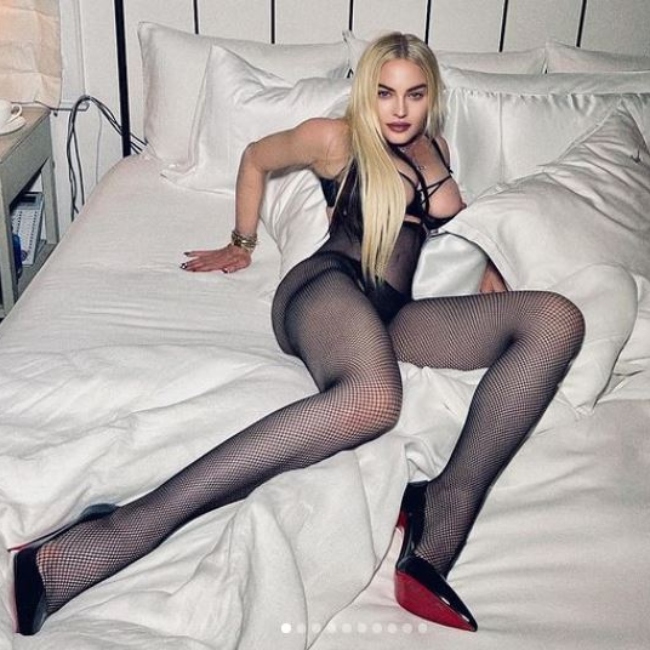 The 63-year-old singer continues to post provocative photos and this time it seems that the harsh reactions are overwhelming.

Stop showing your boobs “: Last night (Wednesday), Madonna posted a new photo session on her Instagram account – and as usual, they were especially daring this time and did not leave much room for imagination. Wearing mesh tights, a black bra that did not hide too much and high heels, The 63-year-old singer modeled seductive poses on her bed (and under it) and fans had a hard time going over it in silence.

“It’s getting a little awkward,” a fan named Michael commented on the photo, which as of this writing has garnered over 900,000 likes and more than ten thousand comments – most of them harsh. “Your kids must be so proud of you,” another fan added.

To the provocative photo session, Madonna added the caption “A guardian angel”, only a pity that that angel was not there to protect her from the fire she continued to snatch. “Stop showing your boobs! We saw a lot of that in the sex book you published and it was brave then. Now it’s just embarrassing and unrelated to your age.” For the sake of those who managed to forget, in 1992, Madonna published the book “Sex”, which included pornographic images and sex simulations that included sadism and oral sex.

“What the hell? You’re doing these shots over and over and it’s not even sexier, more attractive, funny or more surprising. “From the last century. Stop already! Spread out and be the queen you are. I’m your age and you look ridiculous and your face is of course not yours, though still beautiful. You have children! What are you doing?

Of course there were also fans who opted for a slightly more educative approach: “Madonna, I love you but everyone knows you use apps. What kind of message do you give to people who are aware of their body and ashamed in adolescence? It’s unrealistic and in fact it’s just fake. Look at your natural beauty and stop. With these design apps. ”

For the sake of fairness we note that alongside the critical reactions (we are nice) there were also some cheering ones: “The greatest singer in the history of music, the greatest woman of all time. The Queen of Pop, Her Majesty”, wrote a sworn fan, and another joined: “Sexy! What a body “Amazing, you look like a beautiful girl. The jealous guys are going crazy.”

It should be noted that over the past year Madonna seems to have picked up gear when it comes to revealing photos and a quick peek at her Instagram account does confirm that. Last March, the singer posted another photo session wearing a lingerie set with very little fabric and hat. “And now for a moment of introspection,” the singer wrote next to the photos, which even then did not pass well. “Aren’t you a little too old for pictures like this?”, A wondering fan responded, while another follower caught the attention of followers, writing: “It’s so weird that celebs only start posting such photos as they get older.”

But is the “demand” from Madonna to stop spreading legitimate? There seems to be an unwritten consensus in our society that above a certain age it is no longer okay to expose skin, while younger celebrities continue to flood social networks with provocative images – and get sympathetic responses.