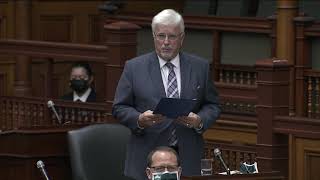 “The Waterloo area had 86 stillbirths from January to July while it is usually used to be about one stillbirths every two months.”

In two different district debates, MP Rick Nicholls asked Ontario Health Minister Christine Elliott about the significant increase in the number of stillbirths. At 02.12.2021 Rick said that there were 86 stillbirths in the Waterloo area Quiet from January to July, while it is usually occur once (one stillbirth) every two months. In a surprising twist Rick says “the mothers had stillbirths were completely immunized!”

The health minister did not offer any data or statistics to back up her claims and chose to state that it was tested, it is safe, and we should all trust the health officials.

For the second time on 07.12.2021 when Rick asked about the significant increase in the number of stillbirths and he quoted: “As is well known in the midwifery community, people who chose the injection have seen the rates of silent births rise exponentially.”

He added that although we had heard the head of the joint staff at the hospital (Dr. Peter Potts) say that the increase in stillbirths was false, he said that he had received the information about it from the health service workers on the front line who had witnessed this tragedy. They chose to report regarding the stillbirths to protect the public. Rick added that “Ontario College of Physicians and Surgeons silences workers” and “if these incidents are not properly reported then in my opinion it is a medical fraud”.

According to globalnews.ca, there has only been 15 stillbirths in Waterloo, not 86.