In Bare Muscles: The Purpose Display of North Korea 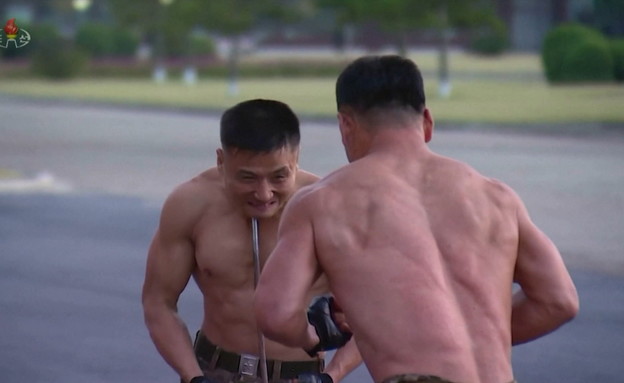 The North Korean media this morning (Wednesday) publish documentation of a special display event for the country’s leader Kim Jong Un and other senior members of the North Korean government and army. In the published documentation, the seniors are seen smiling and applauding while enjoying the performance of shirtless local soldiers, demonstrating their strength and muscles, while performing a series of stunts and demonstrating personal abilities. The publication appears in the local media in the country about a day after Pyongyang broadcast pictures of its latest advanced weapon developments.

The video footage shows the soldiers, only partially dressed in uniform, hitting their comrades with wooden sticks, breaking concrete slabs and rocks placed on their bellies with a hammer and even smashing bricks and iron chains on the bodies and heads of other soldiers. The dramatic climax event showed a shirtless soldier shattering iron chains and lying on broken glass before a concrete slab was smashed on his stomach by the fighter’s muscles.

The unusual videos are part of a “self.defense” exhibition held this week, in which totalitarian North Korea showcased its nuclear and military weapons developments. Among other things, her version of the “hypersonic” (supersonic) weapon that was reportedly tested last month was presented, among other things. Meanwhile, global experts have expressed doubts about the capabilities and effectiveness of weapons.

The North Korean leader has promised to build an “invincible army” in the face of what he calls “hostile policy on the part of the United States.” Kim Jong Un added that the development of North Korean weapons was intended for self.defense, not for taking offensive measures or starting a war.

“The United States often claims that it is not hostile to our country, but there is no substantiated evidence that would lead us to believe that they are not hostile,” Kim said, according to a report by the Central Korean News Agency. “The United States continues to create tensions in the region with misjudgment and wrongdoing,” he added.

The exhibition was held as part of the 76th anniversary of the ruling workers’ party in North Korea. Sources in her southern neighbor told the Washington Post that it was the first incident of its kind since Kim took control of the poor country in late 2011. In recent weeks, Pyongyang has conducted a number of experiments as part of its military and nuclear weapons program.