China: Kidnapped at age four and found home thanks to a map he drew from memory 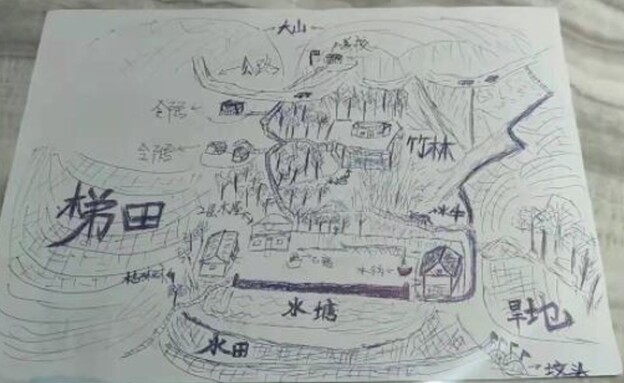 Lee Jingwi was abducted at age 4 by a child-trafficking crime gang in China. He managed to reunite with his family after sharing a map of his hometown, drawn from memory, even though more than 30 years have passed. The victim, who lives in Yunnan Province, shared in an interview with Sky News that he has suffered from “countless nights of longing for home since he was little.” In doing so he decided to take the reins after hearing about other abducted children who had managed to find their relatives online.How exactly did this happen? He shared the map on the Douin app, known outside China’s borders as Tiktok, via a video that led local police officials to a small Chinese village. Thus Jingwi returned to his mother’s hands decades later, and although he did not remember the name of the village where he was born and certainly not the way to it.

A few days before the exciting meeting, the two talked in a video call. “My mom cried as soon as I popped on the phone,” he told me. “In the video I recognized her right away because my mom and I have the same lips and even the same teeth.” He brought back memories of his early years with his family, and according to local reports from China, almost everything I remembered was true – “including the house in my painting, which is still the same now, except that no one lives in it,” Jingwi added.

After being abducted in 1989 Lee was taken to a family in Lankau County, located hundreds of miles from where he was born and from his family home. He told me that in a short time he started drawing pictures on the ground with a stick, which is what helped him remember the village where he was born. “I made it a habit to paint at least once a day,” he told Chinese media in an interview.

He said some details remained as they were: “I recognize the trees, the stones, the cows, and even the turns of roads and where the water is flowing.” He also retrieved some information about the abduction and said that he was taken by a bald man in front of whom he stood helpless. He added that after kidnapping the same couple in his 40s, the two bought him new clothes and took him on a train journey that lasted day and night before transferring him to an adoptive family, which he said took good care of him. “They taught me the principles that have made you a human being since I was a child, so that I can learn hard and develop talent myself in the future.”

Lee added that his father has disappeared and apart from his mother he has a younger brother in the house. Alongside this, it turns out that he is not the only family member abducted as a child: “I have a brother-in-law who has lived in my house since childhood who played with me every day. I once thought she was my older sister, but it turns out she was abducted – she read books and later found her home.” .