The chief rabbi of Kazakhstan fears harm to other Jews 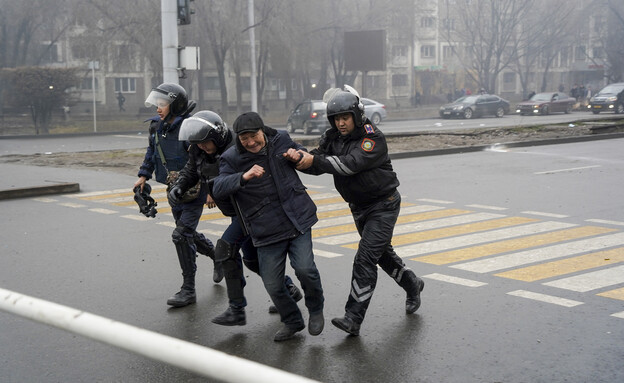 Violence in the streets of Kazakhstan does not stop, and the Jewish community fears the heatwaves and harm to other residents. Rabbi Yeshaya HaCohen, the chief rabbi of Kazakhstan, told N12 this morning (Monday) about the fear of violence in the shadow of the heavy cost of living in the country, and the mourning for the Jewish community member Ban Kojiashvili – who was apparently killed by a stray bullet while walking on the street.

“I have been here, in Kazakhstan, since 1994,” says Rabbi HaCohen. “When the cost of living and rising fuel prices started here – people were scared. People started running WhatsApps and people went to demonstrations – at first legitimate demonstrations, but then suddenly other people came with weapons. These are not local people. They were photographed and did not care.”

The rabbi said that now in Kazakhstan there is a tight curfew: “During the day you have to stay in a safe place and at night there is a curfew until 9 am. Anyone who goes out endangers his life.” Kazakhstan’s National Security Committee said that “the situation in the country has stabilized and is now under control. Terrorist incubators have been neutralized.”

Rabbi Hacohen defined Kazakhstan as a country that advocates peace and patience, claiming that in his opinion the protesters are not local residents: “We do not understand how this situation developed suddenly. Why attack the airport and town halls? The government is investigating who brought groups of armed people – non-citizens.”

Last Friday, a member of the Jewish community, Ban Kogyashvili, was killed as a result of the rising violence in the streets of Almaty. “A dear Jew named Levan got out of a vehicle near his house and a bundle of shots killed him,” the rabbi repeated. “Hevra Kadisha is taking care of him and is waiting for special approval to land a plane that will return him to Israel despite the closure.”

How many civilians were killed in the riots?

“We do not know how many dead there are here, but there are very many. The gunmen here just sprayed, with no plan. People began to feel that there was no response and that nothing was planned. Suddenly we heard gunfire and shelling – even though we live in a community far from the center. Almaty Knesset. We also have Chabad houses there. We could not talk to them because the government cut off the telephone and the Internet. ”

Tokayev claims: The coup was matched by a deliberate hand

Kazakh President Qassem Jumart Tokyev said his country had withstood the coup attempt which he claimed was compatible with a deliberate hand and had been one of the most violent incidents since the collapse of the Soviet bloc. In a speech delivered at an online meeting of the Military Alliance CSTO Led by Russia, Tokayev said the order had now been restored in Kazakhstan, but the hunt for “terrorists” continued: “Under the guise of spontaneous protests a wave of unrest erupted. It turned out that the main goal was to undermine the constitutional order and overthrow the government.”

Russian President Vladimir Putin has also responded to the events in Kazakhstan, saying they are not the first or last case in which foreign officials have tried to intervene in the region. ” Foreign factors encourage coups in the region.