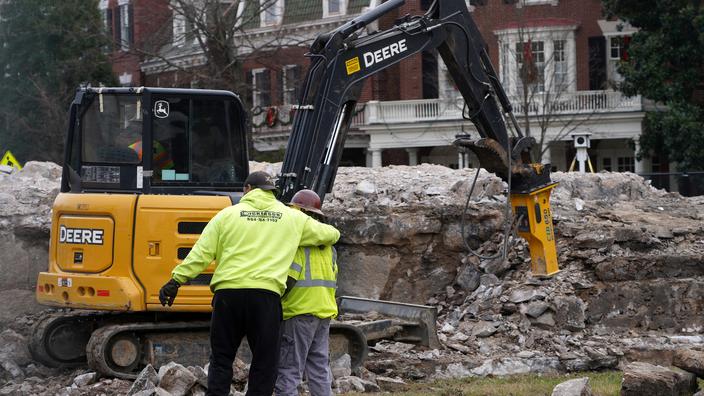 It is a receptacle containing objects or documents representative of an era, intended for future generations. It was found under the plinth of the equestrian statue of General Robert Lee.

A time capsule was discovered Monday, December 27 in the base of a statue of a Confederate general unbolted in September, reviving hopes of discovering a photo of Abraham Lincoln eagerly awaited by collectors.

«They found her!», Tweeted the governor of Virginia Ralph Northam, a week after the opening of a first capsule which had disappointed the experts. “This is presumably the time capsule everyone was looking forHe added, enclosing photos of a rectangular metal box about thirty centimeters long. The governor specified that the box would not be opened Monday, the experts wanting to examine it first.

A time capsule is a receptacle containing objects or documents representative of an era, intended for future generations. It was found under the plinth of the imposing equestrian statue of General Robert Lee, leader of the Confederate army who notably defended slavery during the Civil War (1861-1865), inaugurated in 1890 in Richmond, the former secessionist capital located in Virginia.

Seen as a symbol of the country’s slavery past by many Americans, the statue was debunked in September, against a backdrop of questioning of Confederate monuments. Once the statue was taken down, experts began a search in its plinth for a mysterious time capsule placed there in 1887, which was believed to contain Civil War relics, such as buttons or bullets, Confederate currency, a Bible, but above all a photo showing President Abraham Lincoln in his coffin, a cliché presented as a historical bomb, likely to panic the collector’s market.

A first box had been exhumed and then carefully opened by Ralph Northam, but it contained only three books and a cloth envelope with a photograph, all damaged by water, as well as a coin of unknown origin. This capsule seems to have been placed in the base by workers who participated in the erection of the statue. One of the works was a guide for astronomers and navigators dating back to 1875.

But another seemed to have been published in 1889, two years after the capsule’s supposed burial, suggesting that another such receptacle could be found under the plinth. General Lee’s statue in Richmond had become the target of anti-racist protests after the May 2020 death of George Floyd, an African-American suffocated below the knee of a white policeman in Minneapolis, and the rise of the Black Lives Matter movement. During the Civil War, the Confederate South fought for the maintenance of slavery, which was abolished during the conflict in the rest of the country.