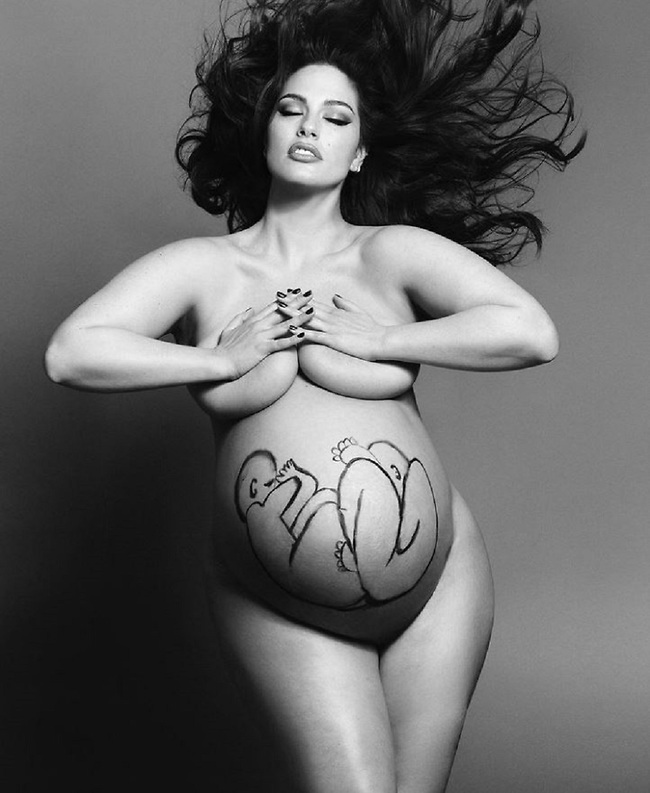 The model who revealed that she is carrying twins, posted a pregnancy photo session – naked of course. And when it comes to stretch marks, rest assured it does not bother her at all. “Justin says my stretch marks look like the tree of life”

Just before the birth, model Ashley Graham (34), who is currently in advanced pregnancy with twins, posted a pregnancy photo session – naked. Alongside the photos, Graham thanked illustrator Kim Sun, who drew the twins on her abdomen in a fetal position. “Thank you for the beautiful art that brought to life the image of my sons.” As of this writing, the photo has garnered over 680,000 likes and more than 3,000 comments so far. Graham announced the pregnancy last July and two months later released a video from a recent ultrasound examination, during which she revealed that she was expecting twins.

One of the most recognizable and recognizable things about Graham is the fact that it is unfiltered. Throughout her pregnancy, the model has often shared intimate photos that reveal stretch marks and also earlier this month posted a nude photo of herself, with the stretch marks very prominent, and wrote: “Justin says my stretch marks look like the tree of life.” The photo, which garnered over a million likes, received thousands of comments – most of them encouraging, but there were also some that were less. “I too was pregnant with twins and had no such stretch marks. I hope it will not affect your career,” wrote a concerned, doubtfully worried doubter. We’ll just update her following a “concerned” follower because a few days after the photo was published Graham modeled for Kim Kardashian’s SKIMS brand, so it looks like her career hasn’t been hurt at all.

Recall that two years ago, in January 2020, Graham and her husband of the past 11 years, Justin Ervin, expanded the family cell and gave birth to their eldest son Isaac. “Our lives have changed for the better. Thank you for the love and support during this wonderful time,” Graham wrote after the birth. A month later, in February of that year, Graham posted a nude photo and shared with the followers the signs left after the pregnancy and birth.

Anyone who follows or even knows Graham a little knows that her sincerity when it comes to her body is her hallmark. While many women try to cling to the ideal of beauty and fight every ounce of excess, it’s fun to know that there are celebrities like Ashley Graham who take care to normalize the body’s natural phenomena – and even take pride in them.