In Kharkiv, sand barricades to save the statue of the poet Shevchenko from shells 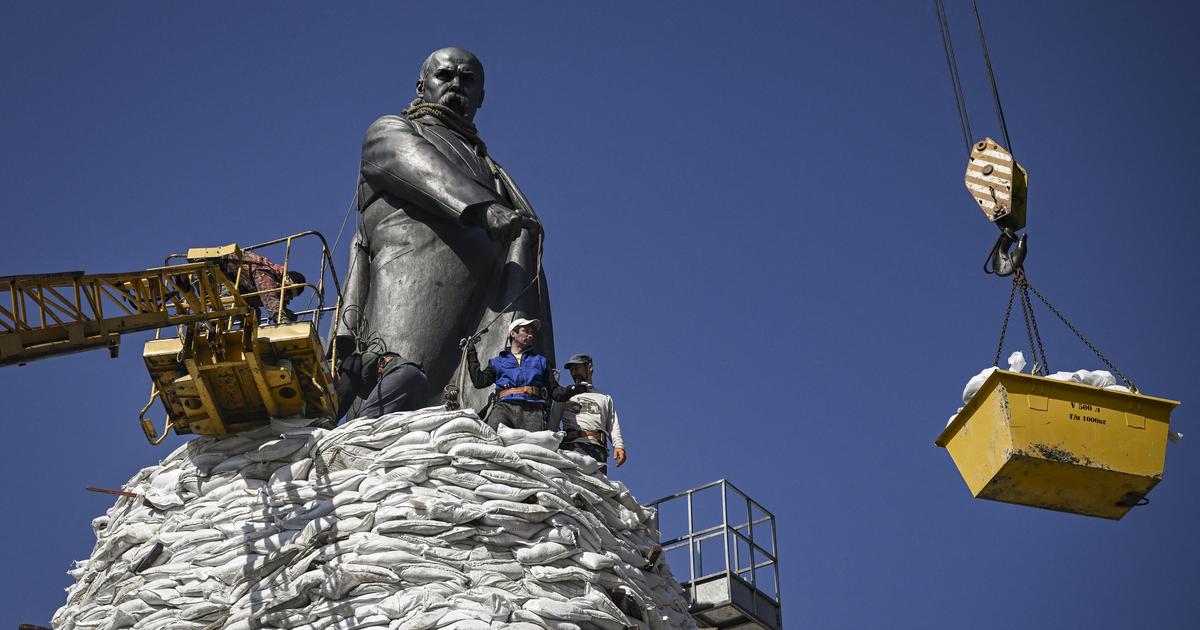 Steeped in culture and history, Ukraine’s second city is keen to protect its monuments “erected in honor of those who made the glory of the city“. Among them, the sculpture of the poet Taras Shevchenko, the main figure of Ukrainian patriotism in the 19th century.

How to protect its heritage from grapeshot: Ukraine’s second city, Kharkiv, subjected daily to Russian bombardments, began this weekend to erect sand barricades in front of its most emblematic statues.

The most important of them sits enthroned in the heart of the city centre, in a vast park with hundred-year-old trees: chin forward and conquering allure, the poet Taras Shevchenko is the main figure of Ukrainian patriotism in the 19th century. Since the country’s independence in 1991 with the collapse of the Soviet Union, not a single Ukrainian city has had its Chevchenko Avenue or Square, also the name of the largest Ukrainian university in kyiv.

Workers and lifting equipment are busy around the imposing black cast iron statue, sixteen meters high according to the town hall, and the highest sculpture in Kharkiv since that of Lenin was brought down in 1994, on a large nearby esplanade. “We must protect the city so that future generations know it as we have known itpleads Petro, a 72-year-old retiree with a leather cap and gold teeth, who came to take part in the operation as “voluntary».

Erected in 1935, the statue of Shevchenko is a mixture of socialist realism and baroque Stalinism, where the central character is surrounded by the revolutionary soldiers at his feet, an image of Ukrainian patriotism long restrained by Russia.brotherunder the communist regime. The sandstone plinth and the Stalinist fighters now disappear under the sandbags, which already come up to the poet’s waist, masking his conquering gait, but not yet his fierce gaze and drooping mustache. “It seems that during the Second World War, a bullet had ricocheted on his head», Says, with a smirk, one of the employees of the municipality mobilized for the work. “At the time, the city had been ravaged, but the relatively unspoiled city center had not been bombarded as it is now“, takes offense Volodymyr, a fifty-year-old colossus. Since the start of the Russian invasion on February 24, Kharkiv has been, along with Mariupol (south), the most bombed metropolis. Stationed a few kilometers away, Russian artillery bombarded the north and east of the city daily, as well as its historic center.

More than a thousand buildings were destroyed or damaged, in a city emptied of around a third of its inhabitants, according to local authorities. The central public buildings, housing administrations and security services, were particularly targeted.

A city of culture and history, Kharkiv has “about fifty monuments erected in honor of those who made the glory of the city“, and which will therefore be protected by sandbags, announced the town hall. And to add:we hope that these monuments will last another thousand years!There are monuments in the purest Soviet style, such as the one commemorating theGreat Patriotic War” where the “liberator soldier“. But also various memorials, including that of Drobytsky Yar, in tribute to the thousands of Jews murdered during the Second World War. Located on the eastern edge of the city, it was damaged in the fighting on Saturday, AFP noted.

The protective wall of the Shevchenko statue almost complete, dozens of city hall employees and volunteers are now busy placing sandbags around the monument of Independence, a goddess brandishing the laurels of victory, installed in the honor of the proclamation of the independence of Ukraine on August 24, 1991. For the moment, one can still read, engraved in the Cyrillic alphabet, the slogan that one now hears everywhere in the country at war: “Glory to Ukraine».

«We are currently unemployed municipal officials and employees, the town hall has mobilized us“Explains a member of the group, Ilona Kalashnikova, usually assigned to green spaces. “At the moment, we mainly pick up branches and trees decapitated by the rockets. This year we won’t plant anything, there won’t be any flowers“, she regrets. “These sandbags are a symbol of our attachment to our city. You can rebuild destroyed houses, but not historical monuments».”