Who wasn’t there to listen to Zelensky in Parliament 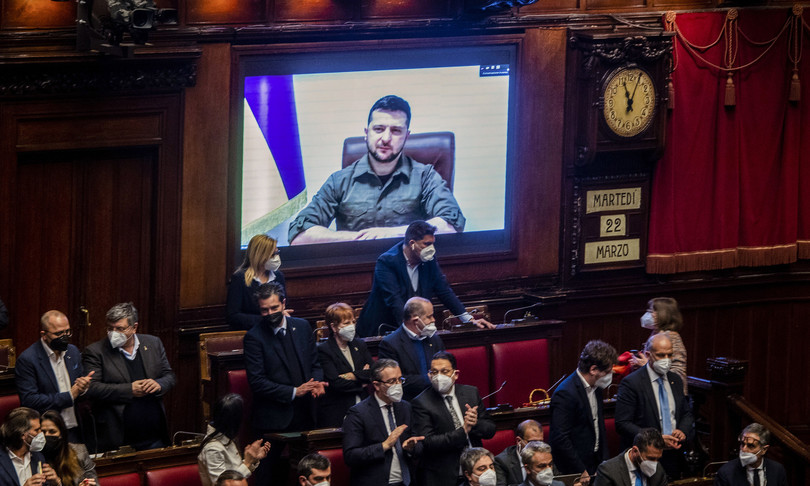 There is a controversy over absences from the Chamber due to the video link with Ukrainian President Volodymyr Zelensky. A hemicycle certainly not overcrowded, with some empty benches in the upper part of the benches and in the stands. But the informal session of the Italian Parliament, in the presence of Prime Minister Mario Draghi, nevertheless saw the warm presence of deputies and senators, who gave Zelensky two long applauses, at the beginning of the speech and at the end, and two standing ovations.

At least a dozen applause for Draghi, with a final standing ovation. There was no note of dissent in the Chamber, indeed there was no lack of demonstrations of solidarity with the Ukrainian people with yellow-blue flags, rosettes, dresses and pins, like the country’s flag for weeks under Russian bombing. The dissent was rather consummated outside the hemicycle, already in the previous days, with the opposition of some M5s (and several former M5s then merged into other groups or members of the Mixed) to have Zelensky intervene in the assembled Chambers.

Since it is not a formal session, and above all since there are no votes, there is no official registration of attendance and absences, nor of missions (ie the so-called ‘justified absences’). But according to some classroom secretaries absences between deputies and senators would be around 300-350. This figure cannot be officially confirmed in the absence of an attendance record.

So, in the Chamber, first Zelensky and then Draghi would have been present about 600 parliamentarians or a little less. Those who were certainly absent are the 15 deputies of Alternativa, the component of the Mixed formed mostly by former M5s. Alternative had announced it publicly in recent days.

The 4 senators of the Italexit group were also absent: “Today the Italexit group for Italy did not go to the courtroom to listen to Zelensky’s speech because the Ukrainian president is not an ambassador of peace“explained Gianluigi Paragone, William De Vecchis, Mario Giarrusso and Carlo Martelli.

Among the ‘certified’ absentees also the former M5s Lannutti (“I am absent, the sending of weapons prolongs the massacre of the Ukrainian people”, his words) and the former M5s Bianca Laura Granato. Also absent from the Northern League Simone Pillon, engaged abroad, and the pentastellato Gianluca Ferrara, head of the M5s group in the Foreign Affairs Commission of the Senate, in Doha for an institutional visit.

Absent, announced, the blue Matteo Dall’Osso (ex M5s). Also absent was the president of the Foreign Affairs commission of Palazzo Madama, Vito Petrocelli, on whom the storm broke out after his words on the need for the Movement to leave the government because it was “interventionist”.

According to parliamentary sources from Palazzo Madama, about thirty (out of 73 that make up the group) M5s senators are absent. But the pentastellato minister for relations with the Parliament, Federico D’Incà, cuts short: “M5s defections? Personal positions”.

Forza Italia parliamentarians absent due to the intervention of the Ukrainian president in Parliament “they are parliamentarians on a mission, it’s not like they desert”, assures Antonio Tajani. “Will there be some former 5 stars now in Forza Italia? They are former 5 stars, that’s not our political line”, he adds. “I judge those present, talk to those absent from all parties. Pillon is on business in London”, says Matteo Salvini. The Northern League senator Pillon reports that he is in the British capital “for the Pro Vita Foundation. Enough of squalid controversies”.

Assures the parent company dem in the Chamber, Debora Serracchiani: “In the Democratic Party there are no defections, we are very convinced that we are there and those who are not there are sick or already had other impediments“. Tranchant the secretary Enrico Letta:” I’m coming, I’m not going to listen to Zelensky. Indecent ballet. Dishonorable choice “. Luca Ciriani, FdI group leader in the Senate, guarantees:” Our group is complete “.

Ditto the colleague in the Chamber, Francesco Lollobrigida: “Compact FdI for Zelensky’s intervention”. Emma Bonino is lapidary: “To the Italian parliamentarians who are not in the courtroom, I only say that they will answer to their constituents”. Pd Senator Andrea Marcucci of the same opinion: “Those who are absent will respond to their conscience and to the voters”. Ironic Matteo Richetti of Action: “I see everyone very worried about those who were missing today in the classroom. You should worry about the fact that they are in the classroom the remaining days of the year”.