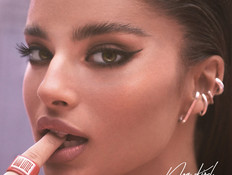 Three months after officially launching her international career, Noa Kirel is releasing her second single “Bad Little Thing” this morning. The song was written by Jay-Hart and Casey Smith and was produced by Sam Martin, Swish and Nate Merchant.

“I’m very excited to release my second international single ‘Bad Little Thing,'” Kirel told the media. “The song is the anthem of empowerment and it touches me especially at this stage of my life. I hope the song will inspire you to be strong, fearless and independent!”

The clip was directed by Roi Raz, who previously worked with Neta Barzilai on the clips of “Bassa Sabba”, “Ricky Lake” and also the clip “Bingo” which came out under Playtica and starred Nicole Scherzinger and Luis Ponsi. In the new clip, Kiral launches a neon collection together with the company that specializes in custom design, “VIBEZ NEON”.

“Please Don’t Suck” was released in July as Kirill’s first single under a multi-million dollar recording contract with Atlantic Records. Pete Genberg, director of the label’s A&R (Artistic Management of Artists) department at the time, said through the zoom that they are very excited to add Noa “to the Atlantic family”. According to his enthusiasm for the Israeli singer, there is more to look forward to than an engine abroad.

“There’s something you need to know: a certain community has already been formed, before Noa even released a single, of some of the greatest producers and writers have already sought to work with it,” he told the news conference. “We will fly her here as soon as we can and introduce her to everyone face to face. From radio, through the media to digital. We want everyone to know this thing that you already know, what a great artist Noa Kirel is.”