Charlie and the Chocolate Factory, Frozen … the top musical shows for children in Paris 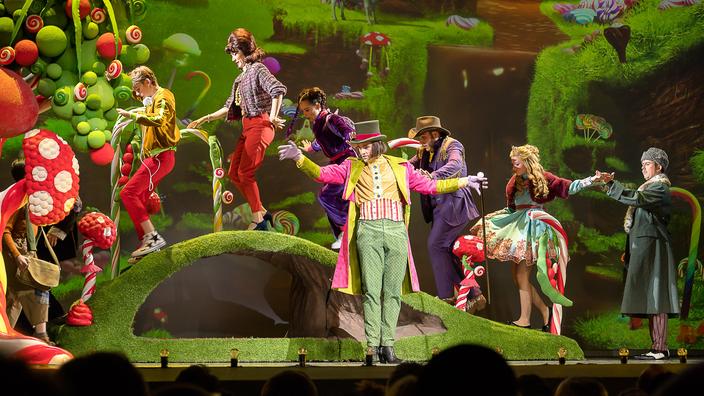 With the wonder of the end of the year celebrations, singing shows for children are popping up all over Paris. From the large music hall to the minimalist concert, travel to the heart of music.

It’s snowing on the smoking little house where poor Charlie Bucket and his family live. Cherub face and crystalline voice, the young boy dreams of being able, one day, to integrate the mysterious chocolate factory run by Willy Wonka. So, when a raffle is thrown to win a tour, Charlie Bucket begs his penniless mother to buy him a Wonka chocolate bar and thus, have a chance to win one of the five golden tickets in competition.

From the famous Roald Dahl novel Charlie and the chocolate factory (1964), the work was adapted for the first time in London in 2003, before joining the boards of Broadway in 2017. Its French version plunges greedily into this universe full of fantasy. Inspired by Tim Burton’s film, the show unfolds colorful and symphonic paintings, directed by Philippe Hersen.

We applaud the interpretation of Arnaud Denissel, who succeeds his sidekick Johnny Depp to play the character of Willy Wonka. The actor fits perfectly into this role which suits him like a silk glove. As well as the performance of the five laureates, accompanied by their parents, picturesque duets to make us cry with laughter. We think of Violette Beauregard, Instagrammeuse and chewing gum star and the gluttonous Augustus Gloop family.

Who said jazz was only for the initiated? For 15 years, the Sunset Sunside concert hall has been committed to offering initiation concerts for toddlers every Sunday afternoon. On stage, professional quartets (piano, bass, guitar, vocals) make the songs of the most famous cartoons swing, all accompanied by a snack for the greediest (€ 5).

On the program, Walt Disney and his Aristocats, The princess and the Frog, or Snow Queen , which will take place on December 5 and 26, the only concert show of the event offering a new reading of children’s stories. “The musicians wrote the sequel to the film. In this new story, Olaf the snowman has received a letter and must find his fiancée», Explains the director of the room Stéphane Portet. Imagined for the little ones, from 2 years old, the experience intends to show that “jazz which is easily accessible music».

Marcelin Clef de Sol, famous conductor, travels around the world. This afternoon, he came back to town, to his studio, to rehearse a concert with his musicians. But saperlipopette … they have deserted. A little head in the air, Marcelin has just understood that he got the wrong day! Fortunately, he can count on the presence of the children to help him rehearse.

Journey to the heart of music, My little classics is a participatory concert that will delight the youngest (from 4 years old) as well as the older ones. Under the maestro’s baton, everyone becomes an apprentice musician, ready to discover the great families of instruments: piano, violin, mandolin, clarinet, xylophone …. And no question of touching with the eyes. In turn, we go on stage, clamp, scratch, touch all the instruments. And tests his virtuosity on extracts of classical music, from Mozart to Ravel, including Liszt and Vivaldi.