Geoffrey Huntley: “A lot of people are being scammed” 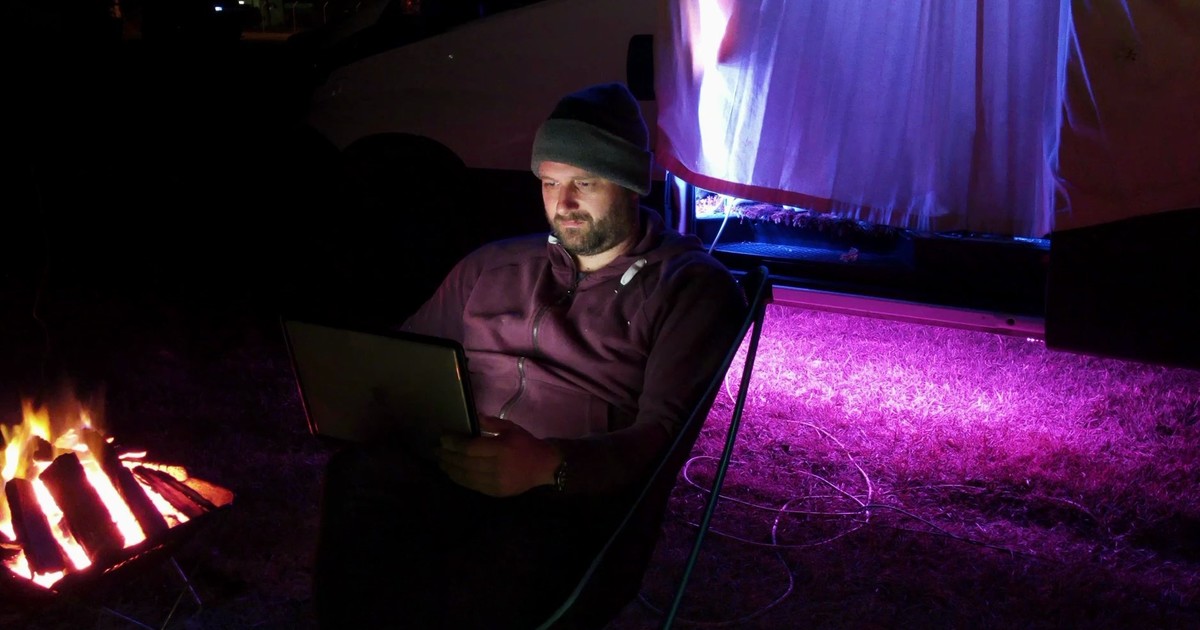 “You wouldn’t steal a JPG … would you”. The parody, based on a well-known late 1990s ad against movie piracy, appears in a file description of nearly 18 TB of NFTs which was uploaded to a torrent by Geoffrey Huntley, a programmer who lives in a van in Australia. Its objective is to “raise awareness” about this technology that is so fashionable: Is it a useful tool or a scam?

The file he uploaded, called “billion dollar torrent,” “is an educational art project,” Huntley tells Clarion, so that people “are not scammed” and understand that it is an investment that should be taken with caution. Mostly because is the latest fashion trend tech: not only are there artists who sell their works but they began to auction memes, tweets and even gaming began to get into this move.

A recurring joke in the networks is that just right clicking on an image and saving it is enough to “take” an asset protected by this technology. And that’s what, in fact, this programmer did on a massive scale: it downloaded all the images and videos hosted on the blockchains (see here) NFT from Ethereum and Solana and made them available in a torrent.

But to understand what Huntley did you have to take a couple of steps back and explain what this NFT technology is, how it works, what it is used for and what uses it is being used for.

The directory with the “billion dollar torrent”. Photo ghuntley.com

What is an NFT

Beyond constituting a fashion, it is basically a certificate of authenticity of something that exists in the digital world, not material.

Tokens, like works of art, are non-fungible because there is no way to replace them: the first tweet in history is only one, just as there is only one Piety original by Michelangelo.

Basically any digital image can be purchased as NFT. That is why, during the past year and the current one, the first tweet in history was sold, a famous meme – “Disaster Girl” -, works of art by Grimes, the original source code of the web created by Tim Berners- Lee and a news story from the NYT. Even Javier Milei, a new legislator for the City of Buenos Aires, sold an NFT: a video where he set the Central Bank on fire.

The problem with all this is that many people believe that when buying an NFT they are buying an image or a video, and this is not the case: “I hope that through ‘thenftbay.org’ people learn to understand that what they are buying when you buy NFT art right now it is nothing more than a series of instructions on how to access or download an image. There is a knowledge gap between buyer and seller right now that is being used to exploit people”Explains the programmer.

Huntley created “The NFT Bay”, a website to “hack” NFTs and make fun of the concept that with its name paraphrases to The Pirate Bay, one of the most popular download sites for movies, music, series, books and programs in the world. The torrent that the programmer uploaded, called “billion dollar NFT”, became itself an NFT, called “the collector becomes the collected” (the collector becomes a collector).

“NFTs are stored on the blockchain and it is possible to ‘sweep’ the entire Ethereum blockchain in less than 10 hours. An NFT (normally) has a property that specifies where the image is hosted ”, he tells Clarín, when asked about how the download was carried out.

Hence the Huntley project it’s not even piracy: it is a compilation of information that circulates on the internet, much of which is accessible with a simple google. When he tweeted it last Thursday, it went viral:

The problem with your proposal is the ambition to have “all the NFTs in the world”: the file is very heavy. Hardly anyone has 18 TB of available space on your computer and buying so much space in a cloud is very expensive.

Asked for statistics, the programmer explained: “As far as I know, no one has completed the torrent download yet. In fact, the seedbox went down early Saturday, so I don’t have statistics. ” But you do know that the web where the torrent is was visited by more than a million users, probably rather curious, rather than interested in the download.

“With the size of the torrent, not many people are able to download it or have disk space to decompress it. I intend to upload it all to the internet archive in the coming days so that future generations can study this moment ”, he says.

A programmer on the loose in Australia

Huntley is a freelance programmer working at Gitpod, a company of developers. Lives in a van in Queensland, Northeast Australia, and are planning to move to Portugal next year.

For his particular project -and for the Australian time zone-, which had an impact on media around the world, he spent the last 4 days “Living backwards”, doing Spaces on Twitter, chatting with journalists and even putting together a “Q&R” that can be accessed here.

He is convinced that his contribution with this download it is “educational art”, because it is, in a way, the absolute culmination of a running joke with the NFTs: “I stole your NFT by right clicking [al hacer clic derecho sobre una imagen en la web el navegador devuelve la opción de ‘guardar imagen’]”.

This is a reference to the fact that, even if an image is registered as an NFT as the “original” – for example, the first tweet in history ”, it is enough to take a screenshot of the image or right-click it and save the image to “take it away”. Of course: the NFT is not the image itself, therefore, strictly speaking, it would be impossible to “steal” the NFT, which has a single owner and is registered on the Ethereum blockchain, a system highly secure and extremely difficult to hack.

“Art is one of the most powerful forms of communication. It crosses language barriers, cultures, educates (the purpose of the website) and reconfigures the way people think (hopefully a single person will not be scammed by the educational lesson) “, says the programmer in dialogue with Clarion.

Huntley is aware of the insertion that his project has in the general internet culture of recent years: “Here we have an almost exact replica of the famous piracy site that even arouses nostalgia, the website is a meme and it is not necessary to explain what is thenftbay.org because people know what thepiratebay.org“, Explain.

He is currently touring Australia to his next European destination. At the moment, it does not have other projects related to the “crypto scene” or the NFTs, and it does not have in mind to continue expanding the huge archive of almost 18 TB. During this time, he worked on a collaborative project to ensure the security of personal data in Covid-19 tracking applications in Australia.

To follow the “billion dollar NFT” project you can enter their newsletter here.