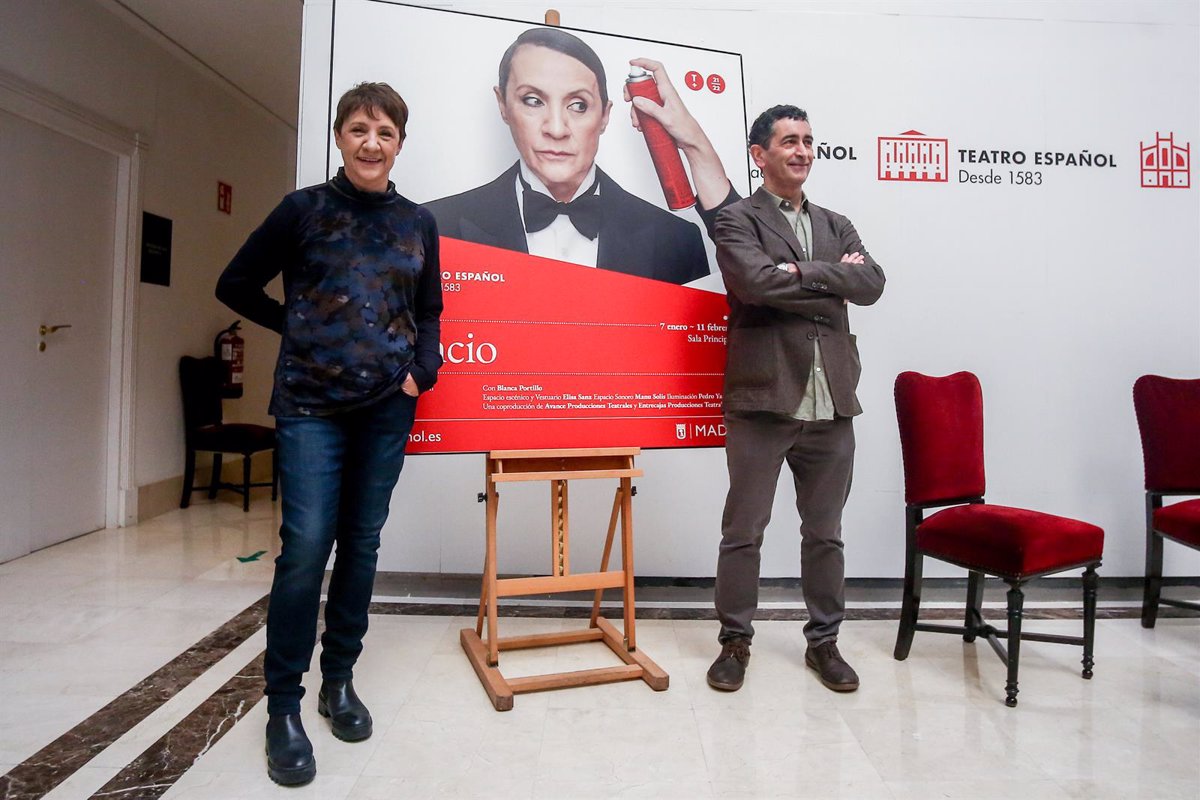 The Spanish Theater hosts the premiere on January 7, at a time when a “theater of excellence” is necessary in the face of the pandemic

Playwright and scholar Juan Mayorga placeholder image and the actress Blanca Portillo premieres on January 7 in the Spanish Theater of Madrid ‘Silencio’, a piece in which they claim the non-existence of borders between theater and life and invite viewers to immerse themselves in the importance of silence as an element “sometimes more eloquent than words“.

Mayorga elaborates and directs in this work a “New dramaturgy” whose “embryo” is found in the homonymous speech that he wrote for his admission to the Royal Spanish Academy (RAE) in 2019, and that from before pronouncing before the academics he already conceived as a “theatrical event” in which, “without a doubt”, Portillo, his friend, would have to be the actress who would evoke on stage that silence that underlines the “feeling of the actor”.

“She is a gifted actress and especially her relationship with the theater is almost priestly“, said this Tuesday, December 28, the playwright in statements collected by Europa Press in the presentation at the Spanish Theater of the co-production of Avance and Entrecajas.

This link with the art of theater was necessary for this work in which Mayorga avoids a “recitation” of his speech, turning it into a theatrical function in which he projects the “forces” found in the theater he loves, “action, emotion, poetry and thought”, and presents “a human being in this complex world”.

With silence as a “central action”, Mayorga has thus woven a story in which Portillo gets into the shoes of an actress who accepts the order of a playwright friend to present his entrance speech as an academic in the RAE on her behalf, before what enters a “conflict” and decides to “turn the dais into a stage“, Mayorga explained.

Likewise, it has influenced that his proposal is far from being a “monologue” despite being Portillo the only one that is in the tables, since, from the construction of “experiences in space and time with silence “, the female protagonist will maintain a dialogue in which she will invite the audience to “play inside herself, with their emotions and thoughts”.

“We want them to leave the theater with a new crystal to see a way of life“, for his part, has added Portillo, who has assured that he felt this precisely when he first heard Mayorga’s speech, an” act of tribute to the theater “that explains his” way of seeing life and gender. ”

The actress has praised the play, however, as a story “beyond discourse”, which deals with friendship, a commitment to theater and the weight of silence, which leads to the understanding that “without life there is no theater and without theater there is no life“.

Likewise, he has highlighted “silence” as a “hit” issue. “Silence is a place of introspection and a way of communicating sometimes more eloquent than words“, has stated about it in a few words that Mayorga has shared.

In this sense, the playwright has pointed out that “it seems that at this time silence is threatened by noise”, while in the theater it is “respected”: “Have you ever asked me why we people of the theater have learned in these rough and strange months. We have realized that in the theater we find one of the most important things in life, for which it deserves to be lived, and one of them is to be silent to listen to the words of the others“.

A THEATER OF “EXCELLENCE” IN THE FACE OF THE PANDEMIC

Those “strange months” to which Mayorga has referred are those of the pandemic, which has been part of the creation of this theatrical proposal because it was the moment in which the director and Portillo decided to start working to make it a reality.

According to Mayorga, the construction of the theatrical version of ‘Silencio’ began with video calls during the confinement period and later continued with the staging of all the ideas that both had raised.

Now, the work encounters the pandemic again at its premiere since there is a moment of rebound in cases in which, according to Mayorga, the creators have, “more than ever”, that to carry out a “theater of excellence” so that “the people who are most concerned and have doubts when leaving home, feel that it is worth going out, and coming back“.

Faced with the “undoubted” effect that the health crisis has had on the theater and the cultural sector, Portillo has advocated assuming the limitations responsibly and “without this implying abandonment of work.”

“This affects everyone, but do we sit still and sit at home? Well, not to the best of our ability. I’m not going to sit at home and wait for this to happen, I don’t want to, can’t, and shouldn’t , so we have to keep fighting“, stressed the actress, who is returning to the theater after two years of hiatus in which, she has recognized, she has felt” a great emptiness “.

After passing through the Spanish Theater until February 11, ‘Silencio’ will begin a tour of Spain, with dates yet to be determined, and he also intends to appear in foreign theaters “if omicron allows it.”

In this way, Mayorga and Portillo seek to dedicate the “time and exclusivity it deserves” to this work, which features set and wardrobe design by Elisa Sanz, lighting design by Pedro Yagüe and sound space by Manu Solís and Mariano García.